Aalsmeer Flower Auction – a colorful way to spend a morning 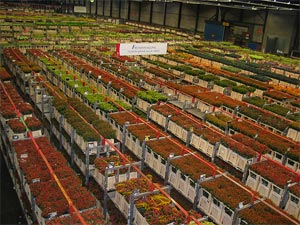 If you can drag yourself out of bed early enough, you should definitely consider a morning visit to the famous flower auction in the city of Aalsmeer, which is just south of Schiphol Airport and easy to reach on a public bus. It’s officially known as Bloemenveiling Aalsmeer in Dutch, but everyone speaks English so asking about the Aalsmeer Flower Auction will get the job done. This is one of the more popular day trips from Amsterdam, and is well worth a few hours if you’ll be in town more than a day or two.

The largest building in the world 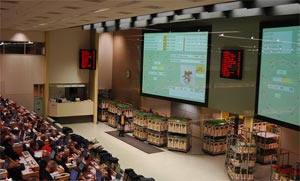 Flowers are huge business in the Netherlands and Aalsmeer is the center of that business. Every weekday they sell around 20 million flowers in this enormous structure, which adds up to about €2 billion each year. It used to be even a greater percentage, but this single structure accounts for just over one-third of all flowers sold in the world.

Many of the flowers in the Aalsmeer Market are grown in the Netherlands, but many of them are grown in faraway places like Kenya, Uganda, and Israel. About 6,000 growers sell to over 2,000 buyers through what is known as a Dutch auction.

Here’s a tour of the Aalsmeer Flower Auction with Rick Steves:

The action never stops in Aalsmeer, except on weekends, but the peak of what is fascinating for visitors occurs each weekday morning. The famous auctions begin at 6:30 a.m., but visitors aren’t allowed in until 7:30 a.m., and the whole thing is over by 11 a.m. There are five separate auction bays and visitors can see them all on a catwalk suspended about 20 feet above the trading floor.

You arrive through the Visitor’s Center where you’ll get some printed information about the goings on. There are audio boxes along the catwalk where you can get information on specifically what you are looking down at, in several languages, including English, of course.

As each lot goes on sale, the price on a huge board starts at 100 and then goes down until the lot is sold. This special kind of auction was invented here, and it is a very fast way of getting the highest price out of the dealer who wants the lot the most.

Aside from the auctions you’ll see this unbelievably huge warehouse just loaded with flowers and plants, with little carts wheeling them back and forth and employees on bicycles as a way of dealing efficiently with the vast distances within the building.

The local bus number 172 goes from Centraal Station and stops right at the Aalsmeer Flower Market. The journey takes a bit over 30 minutes, but you can get the 172 at Leidseplein or Museumplein on the way for a journey that is a bit shorter.