Amsterdam Beer Bike back on the road, now with karaoke! 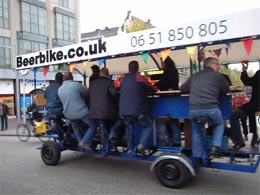 Not long ago it appeared that Amsterdam’s famous beer bikes had been banned from the streets by police due to complaints from citizens, but I’ve been assured the problems have been worked out and the city’s world-famous tolerance has prevailed yet again. There are a few new rules these bike companies must follow, but the good news is the party-pedaling fun seems to be back on for the foreseeable future. People organizing Amsterdam stag weekends in particular will be thrilled at this development.

Evidently the problems before related to the bikes going on random routes through the city center, which meant they’d be going down some normally quiet and small streets at night, all the while filled with drunken and chanting cyclists. The other problem seemed to involve the fact that the driver, who more or less serves as the captain of the craft as well, would sometimes get drunk himself, and this could lead to more rowdiness than Amsterdam was willing to tolerate. 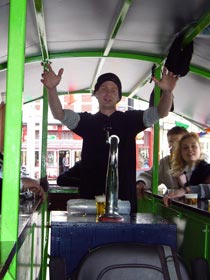 From what I’ve been told, the beer bikes now have what amounts to a set route, which should definitely keep them out of trouble. The party rentals are normally a 3-hour block, and during those 3 hours the bike starts in front of Centraal Station and moves toward the Singel Canal before heading all the way down to Vondel Park and then toward Centraal Station again through the busy Nieuwmarkt area near the Red Light District. To me this sounds like an ideal tour anyway, so this is probably for the best.

They’ve also been told to make sure that drinkers don’t drink too much, and also that there be a sober permanent driver at the helm at all times. Again, this makes perfect sense, and even with a sober driver (that comes included in the rental price) there is still room for up to 19 drunks, 10 of whom can pedal and 9 that are along for the ride.

If some locals weren’t thrilled about some of the chanting and yelling before, it’s hard to imagine what they might think of the newest gimmick, which is an on-board karaoke machine. The main Amsterdam beer bike company has recently added this as a new optional feature, which I believe comes at no extra cost, so now you and your friends can have the thrill of warbling your favorite tunes while spreading your own brand of joy through the Dutch capital at the same time. Their new karaoke bike website is only in Dutch for the moment, but I have a feeling an English version will appear linked to their beerbike.co.uk site if this catches on.

Details of the beer bike