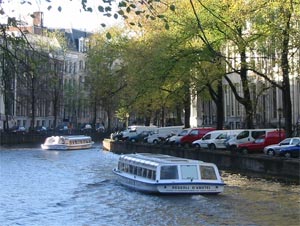 As corny as they may sound, I’ve come to the realization while visiting over 100 cities that taking a simple bus tour upon arrival for the first time is the best way to get oriented in a hurry. I know, to be trapped on a slow moving bus with screaming families and catatonic senior citizens as it trundles through the most crowded streets of any city doesn’t really sound like much fun. But seriously, they are the best way to get a mental snapshot of everything important in a place and their relative locations, and this is usually time and money well spent, as it will reap rewards for the rest of your trip.

Amsterdam has no buses like that, and even if they did you’d see almost nothing since the city center has a total of about 4 streets that buses could even fit on. Of course, the local alternative is the canal cruise, and they are totally worth it, especially just as your arrive in the city.

The basic tours are all about the same

Many different companies conduct these nearly-identical canal cruises, and they can be boarded in several convenient locations around Amsterdam. They all basically ply the same route around the city’s canals, providing multi-lingual taped commentary that is actually very interesting. The city was built around these canals so to hear how that was done gives you a fascinating perspective for the rest of your stay.

The basic tours last one hour, and they leave every 15 to 30 minutes during the day. The easiest place to find them is out in front of Centraal Station, just to your right as you are leaving, but you can also board at the Anne Frank House and in front of the Heineken Brewery, among other spots. Just ask around and you’ll find them easily.

They usually have open tops, but also glassed-in sections so if it’s raining you can still do a cruise, but sometimes they get a bit fogged up on the inside. The basic canal cruise will cost around €8 for adults and about half that for children and seniors, but there are other options. I really recommend the cheapest and most basic cruise, as it’s a sufficient orientation and the best value for the money.

Money-saving tip: For some strange reason, the big companies charge around €12 for this tour and some of the smaller ones charge €7 or so for what is essentially the exact same tour on the same route. Check some prices and board one of the cheap ones.

I actually wonder if the cheap one-hour cruises are offered as a loss leader to book people on the pricey theme cruises. All the same companies also have candlelight cruises, dinner cruises, wine cruises, jazz cruises and so forth, with prices many times higher than the basic ones. I suppose a candlelight cruise might be nice if you are on a honeymoon or something, but start with the basic one and see what you think before booking a theme cruise.

A few companies offer the hop-on, hop-off option, with prices around €18 for 24 hours. They basically go on the same route as the normal cruises, so you’ll be paying about double price to use the cruise boats as a form of transportation as well. This isn’t a terrible idea, but I find the boats to be a really slow way of getting from one place to another. There are very few places you can’t walk to faster, unless one happens to be pulling up just as you are ready to go. If you really hate to walk then getting a one-day tram pass for €6.50 is a better strategy as those things really do save a lot of time getting around.