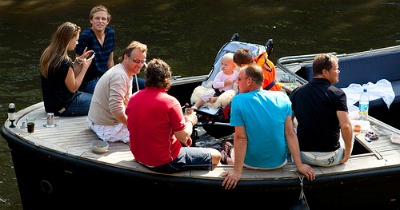 To stay sane on your family city break to Amsterdam you’ll need activities, eateries and entertainment that appeal to all family members both little and large. The great news is that most museums and galleries provide information in both English and Dutch and you can swap children’s theatre for quirky mime and puppet acts. The maze of canals means there are a flurry of boats to point out and also an assortment of bicycles whizzing by to absorb kids over lunch or Mum and Dad’s much-needed tea break. Travelling on a budget? Check out a selection of the best cheap Amsterdam hotels.

Nemo
Shaped like a ginormous boat, this is a hands-on science museum with over five floors of anything but a droll ‘how things work’ classroom. Mum and Dad can put their feet up for a couple of hours while the kiddiewinks see if they can fit inside a giant soap bubble, perform over 10 chemical experiments or check out a display of brains – before or after lunch? You decide.
Oosterdok 2

Anne Frank Huis
A sobering affair but fascinating for children who are fans of the book. The 17th century house was the hiding place of the Anne Frank and her Jewish family for almost two years during World War II. Be sure to arrive early to avoid the worst of the queues.
Prinsengracht 267

De Krakeling
A professional theatre exclusively for children, check out the program for some of their marvellous mime acts – you can forget about the language barrier. There are performances most days of the week which are suitable for age ranges from 3 to 14 years old.
Nieuwe Passeerderstraat 1

Praq
Designed with children in mind, there is a play area for the restless period in between courses and meals are served on unbreakable plates at tables shaped like quirky cars. Kids will be happy with the pizzas or chipolata sausages while adults can indulge in more artisan sandwiches, fish of the day and organically soured produce. The bright red shed building is on the outskirts of town in the middle of a cultural project called Village Fanning. Just take tram number 26 or bus number 37 from the centre to Zuiderzeeweg.
Ijdijk 8

De Pannenkoekenboot
Combine an Amsterdam boat tour with all you can eat pancakes and a ball pit. Kids can choose from a colourful assortment of toppings both savoury and sweet. The one-hour tour cruises around the port along the Old Granary, Central Station and the Piet Hein Kade and there is also the option of a three-hour night time cruise. To reach the jetty, catch the free ferry from Central Station which departs every half an hour and moors right next to the Pancake Boat.
Ms. Van Riemsdijkweg

De Kas
Kids love space to run around so a trip out of town to the De Kas nursery makes a worthy excursion. Everything is grown on site or sourced from neighbouring farmers. While parents can enjoy the beautiful greenhouse architecture of the restaurant, kids can let off some steam with a run around outside exploring the gardens or the pretty wooden playground. From Amsterdam Centraal Railway Station take tram number nine to Hogeweg.
Kamerlingh Onneslaan 3

Joe’s Vliegerwinkel
Undoubtedly the most colourful boutique on the street the shop window is a flurry of kites and miniature flying machines demonstrating aeronautical acrobatics. There are yoyos frisbees and boomerangs for all budgets too. Now all you need is a nice open space…
Nieuwe Hoogstraat 19

Vondelpark
This is Amsterdam’s largest green space and always buzzing with joggers, buggies and picnickers. There are a number of play areas for children as well as park cafes. Tell the kids to spot some of the wild parakeets that were accidently released in the 1970s. During the warm summer months, check out the program of events taking place at the Vondelpark Openluchttheater.

Hotel Waterfront
This cute canal house is located just a short walk from Museumplein and Vondelpark and many rooms have views out over the canal. There is internet access and the hotel runs a tours and travel desk to help you plan excursions. Breakfast is included in the price.

Hortus Hotel
Across the road from the Hortus Botanicus gardens, the Artis Zoo and 15 minutes’ walk to Central Station, the hotel is in a pretty residential neighbourhood. A tram stops close by for easy access to the top attractions and breakfast is included in the price. There are also self-catering facilities, a lounge and pool table.

photo by The Swedish Seal