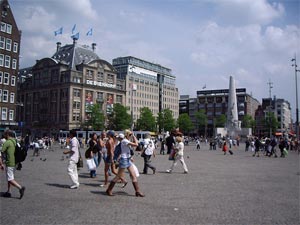 BootsnAll, the big travel network that hosts this site, just announced their Top 10 Destinations for Independent Travelers in 2008, and Amsterdam didn’t make the cut. It seems the list is geared toward cheap and/or less-traveled places, so I guess this shouldn’t be a surprise. The only European city on the list is Budapest, and Sicily also made it on there as well. Both of those places are well cheaper than Amsterdam, although in terms of pure numbers I would imagine they probably get fewer visitors. Budapest is a huge city, so who the hell really knows?

I find the list very interesting and it actually has made me think about trying to get to the 6 out of the Top 10 that I’ve yet to visit. Jordan and Nepal both really sound interesting, and they sound quite inexpensive once you get there. I’m kind of a cheapskate so things like that really go over big with me.

Anyway, if anything, Amsterdam is too popular as it is. Hotel prices seem to keep going up, and recently the price of weed and hash has been going up as well. Maybe when the city completes their cleanup and shrinking project for the Red Light District, tourism will tail off a bit, but probably not.