Amsterdam is an excellent city to do completely on foot, but there are some occasions when you’ll want to use their efficient and confusing public transportation network. If you packed the wrong shoes or if you packed way too much stuff and you are staying in the cool area near Leidseplein, you’ll be thankful that the tram system is there.

There are four main types of public transportation in Amsterdam

General rules for all public transportation in Amsterdam 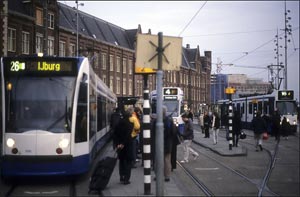 Amsterdam’s transport network is on a zone system, and fortunately everything most visitors normally care about is within one zone, which makes it cheaper to get around. Up until June of 2010, travelers using Amsterdam’s public transport would buy “strippenkaarten,” or “Strip Tickets,” using two strips on a 15-strip ticket for every journey you took. The strippenkaarten are no more, however – they’re no longer for sale, and no longer valid on Amsterdam’s trams, buses, or metro.

Types of OV-chipcards for visitors 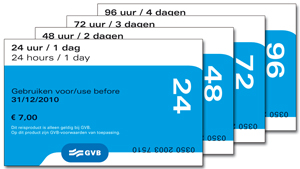 Depending on how long you’ll be in Amsterdam and how much you’ll be using public transportation, you can get an OV-chipcard that’s good from any amount of time from one hour up to 168 hours (which is seven days, but they list them in hour increments). The various OV-chipcard increments and what they cost is listed below:

You’ll notice that night bus tickets are listed separately – that’s because the regular OV-chipcard tickets aren’t valid on the night buses. These tickets will give you unlimited use of all public transportation in Amsterdam for the time you’ve purchased, however, so if you’re hopping on and off trams frequently they can be money-savers.

Important: checking in and out

One important thing to remember is that you need to “check in” and “check out” with the card when you get on and off trams, buses, and the metro. To do this, you’ll hold the card up to the yellow card readers when you first get on board, and then again when you’re getting off. At metro stations, card readers are built into the gates and will automatically check you in and out, but if you aren’t going through metro gates look for one of the yellow card readers.

Where to buy transportation tickets

The disposable OV-chipcards listed above can be purchased at any of the transportation company’s Tickets & Info offices, any ticket vending and add value machines, or online using the “webshop.” You can also buy them from tram and bus drivers and conductors. There may be other places that sell the OV-chipcard tickets, so ask at your hotel or hostel if you’re having trouble finding a place to buy them.

>> There’s more information about where to buy tickets on the official company’s website here.

One of the most intimidating things about the system is it’s not obvious how and where to board. You can either board in the front near the driver or in the middle or rear where the conductor sits in a little booth. You can buy a disposable OV-chipcard ticket from the conductor, if you don’t have one already – and don’t forget to check in with your ticket.

To be honest, most locals don’t bother with any of that since they have weekly and monthly passes so you won’t stand out if you just walk on board a tram and stand there like a local. This craziness always makes me just want to walk instead of dealing with it, but once you try it you’ll see that it’s not tough, and after the first time you’ll know exactly what to do.

Always board in the front. The driver also acts as conductor on these, so you can buy your ticket from him. Look for the yellow card readers so you can check in.

You can buy tickets from machines in the stations, and the gates you walk through are likely to check you in automatically. If not, look for the yellow card readers.

Particularly with trams, it’s pretty easy to ride for free. I actually did it many times before I decided to play by the rules. The drawback is they do have control agents who randomly board all cars and ask for proof of fare payment. If you don’t have it you’ll be publicly humiliated and forced to pay a fine of €37.40 on the spot. Feeling lucky, punk?