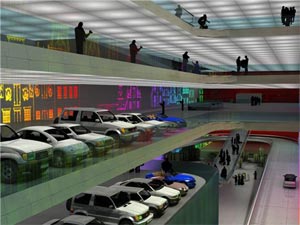 While we were publishing our Amsterdam Coffeeshops FAQ over the last two weeks, we almost missed this fascinating story about a proposal to expand the city with a massive and futuristic underground network of facilities. However unlikely it might seem to ever happen, the proposal has to be taken a bit seriously since it’s from the huge Strukton Groep, which is the construction company owned and operated by the Dutch railway.

A spokesman for the company said the plan would cost about 10 billion euros and could take up to 20 years to complete, and if the global history of large public works projects is any indicator, both of those figures are very optimistic.

The plan calls for an underground web of chambers, which could be accessed by car from many different entrances along Amsterdam’s A10 ring road. They say the uses for the complex could range from parking to sports halls to cinemas to warehouses. “It’s a solution for the future of Amsterdam. If we continue in this way Amsterdam will be closed for cars,” Strukton’s spokesman said.

And that’s the part of the plan that loses me. I’m all for futuristic underground construction, especially if it resembles the League of Justice’s old cave headquarters or something similar, but if the main goal is to provide limitless parking spaces under the city center then I’m against it.

The company says construction materials could be brought in on the canals themselves, so traffic disruptions would be fewer than they have been during the massive metro upgrade that has snarled Amsterdam’s streets for the last few years. And that aside from draining canals one at a time while construction goes on below, the giant project wouldn’t have a terrible impact to the surface of the city during the digging and building.

But still, I hope this plan never gets funded, at least in this incarnation. One of my favorite things about Amsterdam is that its original layout is so unfriendly to cars that residents have little interest in driving through the city center themselves. And this situation has also led to a dominance of bicycle commuting that is unequaled anywhere else in Europe. I’d rather see a plan that made cars in Amsterdam even more useless than they are now, especially if it came hand in hand with making the already-impressive public transportation system even better.