Amsterdam’s Red Light District is now on the endangered list 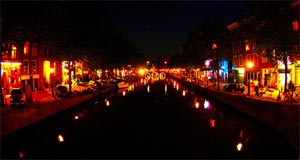 Only a few months after the city announced plans to take over many buildings in its infamous Red Light District and shut down one third of the prostitute windows, Amsterdam has announced a far larger program that intends to spruce up the city’s main entrance completely within the next 10 years.

“It is high time to take action,” city official Lodewijk Asscher said. “The time is past that we let the old city centre be taken over by riff raff.” The “riff raff” he is referring to seems to be the criminal elements that now have a foothold in the most historic and arguably most gorgeous part of the city, which also serves as the first impression of many visitors since it’s just across from the main train station.

Only recently – during the other recent announcement – the city admitted it had no intention of shutting down the prostitution in the Red Light District because its an important tourist attraction and part of the city’s identity, but this new plan will severely restrict the red-lit windows to a much smaller segment of the district, and close them entirely elsewhere. Prostitution is legal in the Netherlands, as it is in many other European countries, but the city has decided the area has brought criminal elements in that have slowly been ruining this important area.

Petty theft and human trafficking are two of the more obvious problems the area currently seems to support, but the city evidently has reason to believe that many of the hotels, coffeeshops, sex shops, and souvenir stores in the district are part of the criminal underworld as well. The plan is to sweep the prostitute windows into one small area, and clean up and revitalize the main central section surrounding the especially scenic canals in RLD.

But it’s not just the Red Light District that will be affected. The new plan calls for a clean sweep along the Damrak and the Rokin, which make up the main boulevard that runs from Centraal Station to the Rembrandtplein entertainment area. The Dam Square area itself, as well as the pedestrian-only RLD street of Warmoesstraat – which is lined with bars and coffeeshops and no prostitutes – are also part of this huge clean-up plan.

“The monumental character of the buildings will be restored,” the spokesman said, and “High quality retail” will be the new emphasis. Initial investments of €120 million are already planned, and it will take many hundreds of millions of euros more over the next decade to complete the transformation.

What does this mean for future visitors?

I’m almost always a big fan of gentrification and clean-up programs, especially when they emphasize restoring classic architecture, but something about this plan rubs me the wrong way. The Red Light District has always been relatively safe for visitors, especially outside of the wee hours, so it’s hard to figure out where the motivation to turn the whole place upside down came from.

The spokesman also commented that the city won’t miss the “boorish Brits” who might stop visiting as a result of this, but the stereotype he’s referring to have always been a small minority of Amsterdam fun-seekers. The weekend warriors helped make the area seem a bit wild, even though almost everything going on was really quite tame. And it was always easy enough to avoid obnoxious drinkers by staying in one of the other major hotel areas anyway.

Amsterdam has been scaling back the coffeeshops for about a decade now, and thankfully this plan doesn’t seem to be targeted at these beloved institutions. I’m sure we’ll lose more than a few coffeeshops in the RLD over the next decade, but at least it doesn’t sound like the whole scene is in the city’s crosshairs…yet.

I can’t help but think this move will limit the total number of tourists who visit the city, but I also imagine the city realizes that as well. If they want fewer but less problematic visitors, this should work well. My advice is to plan your Amsterdam trip before too much time passes. The new Amsterdam might also be an excellent place to visit, but it’s certain to be very different from the Amsterdam of today, and these may well be the good ol’ days, my friends.