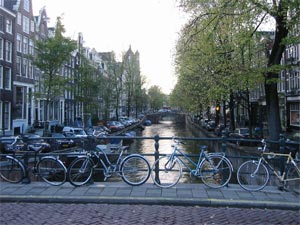 Renting an apartment in a foreign city used to be so risky and complicated that it was only for the bold and very wealthy. But now, renting an apartment in Amsterdam is not nearly such an ordeal, and can be done for quite a reasonable price.
Talk to any Amsterdam local and they will tell you about the “housing shortage” here, and many of them even resent the idea that a foreigner might move into one of their precious apartments for a month, or indefinitely.
But don’t let that stop you.
Renting an apartment in Amsterdam is a great idea for travelers for several reasons. It can be cheaper than budget hotels or hostels if you’re staying long enough, especially if you’re traveling with a family or a group. Having your own kitchen means you save more money by cooking some of your own meals (this is another perk if you’re traveling with kids or picky eaters). And having an apartment gives you a chance to see the city more like a local would, getting you away from the touristy areas and into more residential parts of the city.
You may also be considering a move – permanent or semi-permanent – to Amsterdam, in which case you’ll be looking for a more long-term apartment rental. You’ll find some information below about how to get the best deal on a long-term rental, as well.
>> Search and book apartment rentals in Amsterdam and the surrounding area

If the company you work for is moving you, chances are they’ll have a program in place to help with all the details. There are also local agencies in Amsterdam that are set up exactly for this purpose. They list dozens of fully-furnished apartments at any given time that are ready to be moved into, often with all the dishes and linens included.
The one major wrinkle in going this route is they tend to be astronomically expensive, at least compared to the normal Amsterdam apartment prices. They make moving in easy, but you (or someone) will be paying probably two to three times the normal price for this luxury.

Getting a Good Deal on a Long-Term Amsterdam Apartment Rental

Most of the apartments in Amsterdam are controlled by the city, so legitimate residents get themselves on a waiting list when they turn 18 or so, and then a few years later they are notified that one has opened up for them. This system makes it completely impossible for a foreigner to apply for one of these apartments, but it does provide for a hidden benefit. Since many of the waiting list people have other places to live they are often willing to (illegally) sublet their own apartment to a non-local. If you are looking to become a permanent resident of Amsterdam you may want to go through more formal channels, but if you want to try it out for a month or two, or even longer, this situation makes it quite convenient.
The Amsterdam locals also insist that apartments there are incredibly expensive, and maybe they are compared to the suburban flats they move into with their significant other while renting you their city apartment. But compared to London, New York, San Francisco, or Los Angeles, apartments in Amsterdam are quite cheap. Even if you are paying a healthy premium to the leaseholder on top of the rent they are paying, you’ll still be paying less than you would in those other cities.

What Amsterdam Apartment Rentals Cost & Where to Find Apartment Listings

Studio apartments start in the €600 per month range and obviously one-bedroom places start a bit higher than that. Apartments in Amsterdam tend to be quite compact, particularly near the older part of the city, but that’s true in nearly every large city on earth. The best places to look for apartments here are on Craigslist and on Elynx, which is a site dedicated to the English-speaking community in the Netherlands. Just click on the Notices link on the left menu and you’ll find listings for both long-term and short-term housing available.