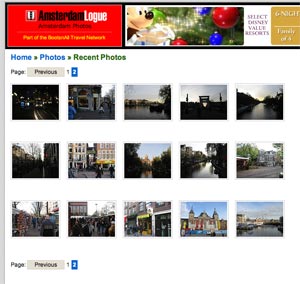 The Amsterdamlogue tech crew were recently able to pull themselves away from their ongoing Wii ‘Action Girlz Racing’ tournament for just long enough to tell me about a new feature. We now have a photo gallery built in to this site, so if you are one of those people who isn’t satisfied with the postage-stamp size photos we use to decorate each page, you’ve now got a minor thrill to look forward to.

Check out the new Amsterdamlogue photos page to see a gallery of 35 modest photos taken by yours truly when I was living in Amsterdam in 2005. The lighting is poor in most of them, and many of them show the hot entertainment areas during the quietest and loneliest time of the day (the morning). Many have dry and/or confusing captions below them as a bonus.

These photos were originally going to be used as part of one of those collages where tiny pictures become pixels that make up a larger image, but I gave that up when I realized I had no idea to create a giant Bob Marley poster out of them, even if I did have enough shots.

The good news is that in 2008 I’ll be adding a ton of new photos to the collection, so this bit will just whet your appetite. I’ll update you when I add the newer and better set, but in the meantime I invite you to click on through the Amsterdamlogue photos page for a short and frustrating virtual tour of certain parts of the city.