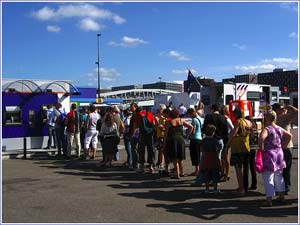 This became much more obvious when I was living in Amsterdam, but if you get unlucky you might notice quickly that there are actually very few automatic teller machines in the city. In most American cities, and even in many European cities, there are multiple machines at every bank, and banks seem to be on every other corner as well. But in Amsterdam banks tend to have only one, and there are surprisingly few of them in the main tourist center.

So my best advice is to withdraw larger amounts when you need money, and this will save you on ATM commissions as well. There is a bit of petty crime in Amsterdam, but it tends to take on forms like bike theft much more than muggings or pick-pocketing. And you should always keep your money in a safe place no matter where you are, not just on holiday anyway. The other advice is that when you see an available ATM, get cash then instead of waiting until you are broke.

What typically happens is early in the evenings lines start forming at all the ATMs and they only get longer as the night goes on. It seems that most of the locals haven’t really learned a way around this either, but by planning ahead you won’t end up spending half an hour or more on such a time-wasting activity. And on Sundays some of the ATMs are actually out of money, so try not to wait until Sunday even if there are lines.

Where to find ATMs

First of all, they call them Geldautomaats in the Netherlands, but there are enough foreign English speakers in town all the time that asking where the nearest ATM is will almost always get a quick and correct answer.

There will be at least one in your baggage claim area at Schiphol, and since you’ll (probably) be waiting for your bags anyway, this is the ideal time to withdraw some euros. If you miss this opportunity there are at least two geldautomaats in the area past customs, so you’ve got a couple more shots before you buy your train ticket to Centraal Station.

There are at least two ATMs at the station as well, but sometimes lines get long here too. Again, the advice is that if you need some cash and you see an open one, use it because the next one you see might have a long line. 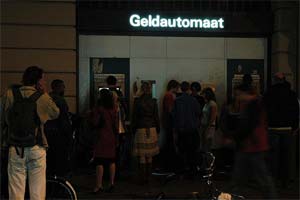 Around the city center

There is at least one ATM at every main tourist area, but sometimes there is only 1 or 2 and dozens of people queued up already. There are 3 or 4 banks in the Dam Square area, although not all of them are right on the square. One of them is across the canal toward the Magna Plaza. You’ll also find ATMs in Rembrandtplein, Leidseplein, and a few other random areas, but not nearly as many as you might expect in a city of this size.

If the lines you see are really long

If this happens you are probably stuck and your best bet is to just get in back. Most of the people in that line will be locals, and if there was another convenient machine around the corner they’d be using that one instead of standing in this line. Trust me. You could try just randomly walking around until you see another one, but the whole point of mentioning this in the first place is that there just aren’t many around, so the line is usually your best bet if you didn’t think ahead.