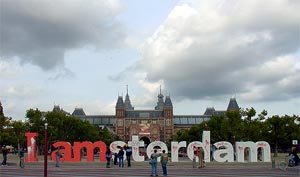 Crammed with more things to see than most cities twice its size, this has been a tourist-friendly city for centuries so there is no shortage of attractions in Amsterdam. The city is famous in certain circles for the prostitutes in its Red Light District as well as for their liberal policies toward soft drugs, but forgetting both of those things this is a stunning European capital with a thriving arts scene, and is also overflowing with important history and famous museums.
For those who are planning on cramming a lot of Amsterdam museums and such into a relatively short visit, you should definitely consider getting an IAmsterdam Card. These cards aren’t cheap, but they can save you money and time if are planning on hitting the museums and doing a canal tour anyway.
If you are in the planning stages of your Amsterdam trip, here is a quick rundown of some of the better attractions:
Canal cruises – These mellow and informative cruises are a great way to get a quick orientation to the city when you first arrive. There are many operators and prices are quite reasonable. In the evenings some of the tours take on themes and have alcohol available, but just the regular tours are the best way to see everything in the city quickly. You’ll see why once you arrive, because in Amsterdam the canals go almost everywhere but the streets do not.
Red Light District – This section just across from Centraal Station is the oldest part of town and now a major tourist draw for the prostitutes flirting with pedestrians from inside their red-lit windows. Except for very late at night, this area is safe, fun, and crowded. Many of the cities lower budget hotels and hostels are in this neighborhood so it’s always alive with younger tourists, but visitors of both sexes and all ages are a constant presence so there is no need to feel embarrassed.
Anne Frank House – This is the actual apartment where young Anne Frank and her family his from the Nazis for two years and she wrote her world famous diary. The displays inside explain the story well even for those who never read the book so this is worth a visit for anyone.
Van Gogh Museum – This museum, not surprisingly, boasts the largest collection of works from Amsterdam artist Vincent Van Gogh on earth. If you are a fan of his work then this is a must, but if you are mostly just intrigued by his name there might be better choices.
Rijksmuseum – Speaking of better choices, this is it. It’s under a major renovation until 2010, but it’s still open and mostly the same inside. This massive state museum costs the same as the nearby Van Gogh, but is filled with important works from many other famous artists in addition to loads of exhibits that go far beyond paintings.
Stedelijk Museum – This is the modern art museum that is normally based in the same museum district as the Van Gogh and the Rijksmuseum, but it’s temporarily been moved to a new site near Centraal Station.
Rembrandt House – This is a former home of the famous painter that features displays of hundreds of his prints. There is also period furniture and objects dating from around the mid 17th Century when he lived here.
Heineken Experience – The old Heineken Brewery has a slick self-guided tour that includes three small glasses of delicious Heineken at the end, as well as a free gift!
Cannabis Museum – In the Red Light District is probably the world’s only museum dedicated to marijuana cultivation and smoking. Unfortunately it’s not very impressive on the inside. Visit if you must but be prepared for a disappointment.
For something completely different and specialized, there are actually several nude beaches near Amsterdam, as well as a naturalist resort close by, so fans of that lifestyle have several good options.