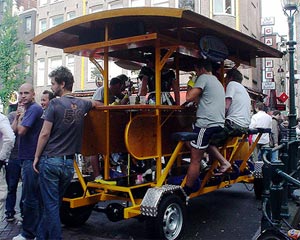 UPDATE: The Beer Bike has evidently worked out the troubles with the police so as of late June, 2008 it’s on the road again with the problems discussed below solved. Read more about the new Amsterdam Beer Bike situation, including the new karaoke machine option.

I recently used a photograph of Amsterdam’s Beer Bike when I was discussing itinerary ideas for a weekend in Amsterdam, and I was going to feature the bike itself in a post this week. Just as I was gathering up the facts I came across news that the Beer Bike has just been banned (in early June, 2008) from Amsterdam’s city center, although it seems the bike is still able to operate elsewhere if anyone is interested.

Several different companies seemed to be able to book this thing, although it appears it is owned by the Beerbike.co.uk people, who also operate a Dutch site called partyfiets.nl (party bike, of course). There’s another one that says it seats 17 called the Fietscafe, and there may be even more where that came from. We’ll see if the ban stays in place, but it most likely will because this thing has been known to cause traffic problems along with the kinds of noise complaints you’d expect when you get 19 beer-swilling people together to pedal around the city with only one “sober” guide to stay in control.

There are a few multi-person bikes cruising around Amsterdam, and all of them turn heads, but these are/were certainly the craziest of them. There are seats for 12 people to pedal on the sides, and benches and a center aisle with room for 7 more party people. The guide, who comes included in the price, would be the 20th person on board if the bike is fully loaded.

In case they are able to resume operations, here are some details:

That last part might be what did them in. This has obviously been a popular thing for the many stag parties that invade the city each weekend, so the fact that it’s loud and promotes rowdy behavior makes it unpopular with the locals as the evening goes on. Particularly in the Red Light District, these stag parties often involve lots of yelling, but residents were unable to complain because the group couldn’t be tracked. Put them on a 20-person beer bike and suddenly everyone has a focus for their frustration.

If this ruling gets changed I’ll update this post, but in the meantime here’s a short video so you can see what this thing looks like on the road: