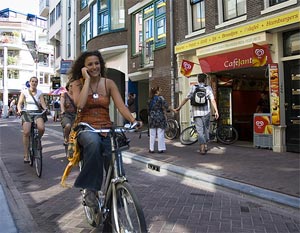 The instant you walk out of Centraal Station for the first time you’ll be hit over the head with the fact that this is a city dominated by bicycles. The train station itself has a 6-story parking structure – only for bikes. Not only are there prominent bike lanes along nearly every street, but there is also a network of streets in the city center where bikes can go and cars aren’t allowed.
This helps make Amsterdam an ideal city in which to own a bike if you live here, but before renting a bike you should know a few things first. Renting a bike in Amsterdam can be an unforgettable experience and is highly recommended, but it’s best to limit that to a self-contained part of your stay. Trying to use a rented bike to get around the city during your whole stay is actually more hassle than it’s worth. If you’ll be in town for 3 days, then get around on foot or by tram for two of those days, and plan on one day of bike rental where you can see some of the more remote sights and/or just tool around for a day.
Great things about renting a bike in Amsterdam

Here’s a video about riding bikes in Amsterdam that will likely make you want to get on a bike, in Amsterdam or otherwise:

Downsides to renting a bike around Amsterdam

And here’s a quick video of some of the crazy traffic in Amsterdam – bikes and other vehicles – that might make you want to get used to the city before you hop on your own two wheels!

The bikes in Amsterdam
In almost all cases you’ll get what is known as a cruiser in most places, but it’s known as an omafiets in Amsterdam. Omafiets means “granny bike” because these things all look 100 years old and are made of what seems to be solid steel. They are heavy and very sturdy and the single gear is all you need in this flat city and region. Some places also rent mountain bikes, tandems and other novelty bikes, but it’s more fun to take the “when in Rome” approach and find out why they all ride these steel antiques themselves.
Helmets
It’s unclear if any Amsterdam bike rental places offer helmets as an option, but if you managed to find one you’d be the only person in the city wearing one. Strange as it may seem, nobody wears a helmet here, not even young children. Bike accidents seem to be rare, but they do happen. Helmets are most important in a high-speed crash with a car, and the few cars in Amsterdam are well aware that they are severely outnumbered by bikes, so the risk here isn’t as great as it is in places with fewer bikes.
Prices
Most places range from around €7 up to about €12 for a 24-hour rental, including two sturdy locks. Insurance will add €3 to €4 per day to that, but it gives you a lot of peace of mind. Additional days are around €5 plus insurance, and some places have weekly rates that become quite cheap if you plan on keeping it that long.
If you are going to be staying in Amsterdam for a week or more and want to use a bike to get around the city you can actually buy a bike and then resell back to the same place for about the same price as a weekly rental. If you are staying even longer this becomes a far better option.
Finding a rental company
This is easy since they are all over the city, and especially concentrated in the tourist areas. There are quite a few rental companies not listed here whose locations are not convenient for most people.
Mac Bike – This company tends to dominate the bike rental market in Amsterdam. They have three rental locations: Centraal Station, Waterlooplein, and Leidseplein. Their bikes have a plaque in front that says Mac Bike so everyone knows you are a tourist renting for the day, but who cares? You can rent for as little as 3 hours, which can be fun and short enough that you don’t even need to worry about locking and leaving the thing.
Mike’s Bikes – This company is part of the Mike’s Bike Tours chain. Their location on Kerkstraat isn’t hard to find, and they tend to be the cheapest in town. Also, consider doing their daily bike tours instead of renting on your own, which include the bike rental in the price. This company is great and highly recommended.
Rent A Bike Damstraat – This newer company is located just off Dam Square, so it’s quite convenient for most people. They offer a 10% discount if you print out their web page.
Star Bikes – They are located just outside of Centraal Station to the left. Their rates are quite good and the photo on the main page of their site makes them seem like a fun group of people.