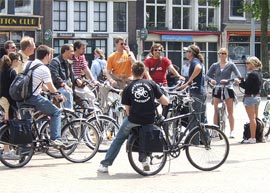 Amsterdam is considered to be the bicycle capital of the world by many, and it’s definitely true that in the city center bike traffic tends to dominate on all but the most major roads. If you’ve yet to make it here for the first time you might be considering renting a bike for all or part of your trip, but outside of the novelty value in that it’s not necessarily a good idea for most people. Check out the Amsterdam bike rental page for the pros and cons, but to sum it up quickly, it can be a much bigger hassle than you’d think.

One excellent alternative to renting a bike for a day or two is to join in one of the tours given by the popular and acclaimed Mike’s Bikes company. This will give you the complete thrill of participating in the giant army of cyclists that are on the roads all day, but you won’t have to worry about getting lost, having your bike stolen, or even not being able to find a good place to park the thing. You’ll also be getting a great tour of Amsterdam in the process, and get tips for renting a bike and riding in the city while you are at it.

It’s hard to piece together the history of this company, but it appears that they are part of a family of similar tour companies in other European cities, some of which now go under the Fat Tire Bike Tours moniker instead of Mike’s Bikes. You can find these tours in Munich, Paris, Barcelona, and Berlin, and they all seem to share great reputations and get glowing reviews from past clients. I’ve taken a couple of these myself and I find it hard not to gush about what a positive experience it always seems to be.

Mike’s Bikes in Amsterdam has a couple of different city bike tours, and they also rent bikes for general use out of their main location. Again, I’d recommend starting with a bike tour as early on your trip as possible, and then deciding whether or not to rent a bike of your own after that. The city center is so small that walking from place to place while sightseeing is almost always the best option, especially for anyone energetic enough to want to ride a bike. 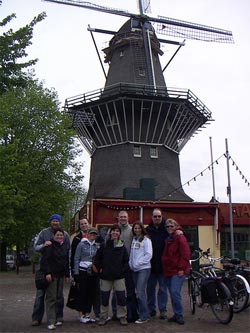 The main offering is their standard 4-hour full city bike tour, which not only includes nearly every major Amsterdam highlight, but also a good stretch down the Amstel River, which eventually leads you to one of the remaining older windmills near the city center. You’ll also stop at a cheese farm and a clog factory, so no cultural stereotype is left unturned, but it’s all a lot of fun anyway, especially if your particular group is lively. These tours can also be great for solo travelers, as this type of set-up lends itself to far more interaction and bonding within the group than any other kind of tour. You’ll also have a chance to make even more friends on the compulsory beer stop in Leidseplein.

Bike & Boat Tour
From May through October you have the alternative of a similar 4-hour bike tour that includes an extra hour on a private canal boat tour, which also includes free sodas and beer during the aquatic portion. This 5-hour version is an excellent choice for first-time visitors, as the canal cruises of Amsterdam are actually the best first orientation, and combining that with this bike tour saves you money, gets you free beer, and gives you a far more social setting in which to get to know Amsterdam.

How to join the tours

One of the wonderful things about how these Mike’s Bikes tours works, is they make it incredibly easy to participate. For most of the year all you have to do is show up at the designated time just outside the Rijksmuseum (the side that faces Museumplein, not the side that faces toward the city center). The tour leader will collect everyone there for the tour, and then lead a walk back to the headquarters a few blocks away.

Once there, they will outfit each person with a bike, and even rain gear if needed. You don’t need to make reservations and they have plenty of bikes available, but if you are part of a larger group they do ask that you call in advance to warn them. If the group is large enough, they can break it into smaller and more manageable sub-groups. The city is made for bikes, but having 20 in one big cluster can cause some problems and also make it harder for participants to hear the entertaining commentary along the way and at the stops.

Prices (including bike for the tour)