Budget Airlines that Fly to Amsterdam 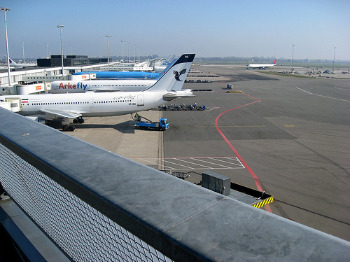 In the grand scheme of things, the city of Amsterdam in the not-large country of the Netherlands probably doesn’t seem like it would be home to one of the big European airport hubs. But it is. Amsterdam Schiphol Airport (AMS) is not only the main airport for Amsterdam and the Netherlands, it is a popular international entry point to Europe, so even if you’re not planning to stay in the Netherlands you may find your flight routed through Amsterdam.

But if you are planning a trip to Amsterdam and you’re looking for ways to save on airfare, just knowing that Schiphol is a major European hub may not be enough. It can sometimes be advantageous to look at other European hubs to see if prices on airfare are lower than flying directly into Amsterdam – but then that means you’ll need to find a way to get yourself to Amsterdam.

If you can find a really cheap fare into – let’s say – Paris or London or Frankfurt, and then combine it with an even cheaper flight on one of the many discount airlines that flies in Europe to get to Amsterdam, you could save quite a bit of money. Yes, this kind of flight combination takes a bit more logistical planning (since it’s two separate flights and not coordinated between the airlines), but it just takes a little time to make sure all your ducks are in a row.

Interested in seeing whether you can save money on airfare this way? Then here are the budget airlines that fly into Amsterdam Schiphol so you can figure out which ones might work for you.

Budget Airlines that Fly to Amsterdam

Amsterdam’s airport is about 15km from the city center, and has won awards for being a spectacular airport. Schiphol (pronounced SKIH-full) is well-connected to Amsterdam via public transportation, and on a long enough layover it’s even close enough to spend some quality time in the city before your next flight. Despite being the homebase for the Netherlands’ national airline, KLM, there are also enough budget airlines that fly into Amsterdam that you have a decent number of options. No matter what airline gets you there, here’s what you need to know about getting from Amsterdam Schiphol Airport to central Amsterdam.

The budget airlines that fly to Schiphol Airport in Amsterdam are listed below, and some of the main cities from which they depart are listed after each airline name: