Buying a Used Bike in Amsterdam 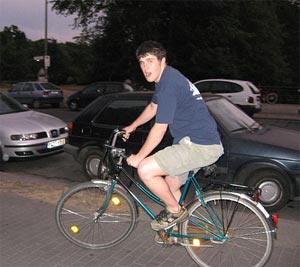 Every visitor who arrives in Amsterdam for the first time can’t help but be amazed at how jammed the city is with bikes. At Centraal Station alone there are literally thousands of them parked and locked up every day. The bike culture in Amsterdam isn’t some new environmental movement, it’s the way the locals have been living for decades.

Renting a bike vs. buying one

Many visitors like to get into the act by renting a bike during their stay, and it definitely can be a lot of fun, although there are some hidden complications involved and I cover those in the main Amsterdam bike rental section. If you are only staying for two or three days like most visitors you have a few rental options, but if you are staying a week or more it will actually be cheaper to buy a bike and then sell it back when you are leaving.

I’m not talking about buying a stolen bike, of course. Bike theft in Amsterdam is a huge problem and you have to consider it whether you rent or buy, because it complicates everything. Especially in the Red Light District, you’ll often see junkies offering just-stolen bikes for around €20 as long as you are ready to jump right on it and go. Obviously, by buying a bike this way you are encouraging future thefts, which is just one reason I’ll never do it.

You can rent a bike around town at the big companies like MacBike and Mike’s Bikes for around €10 for the first day and around €5 for each subsequent day. These rates include a good lock, but insurance is extra, and until you know the best ways to prevent theft this will always be a gamble. At Mike’s Bikes you can rent a cruiser for €40 for a week without insurance, and at that point you are probably better off buying used bike instead.

How and where to buy a used bike

There are bike shops all over town, although there are fewer right in the tourist center. The Dutch word for bike is fiets, but asking around or just walking away from Centraal Station for 15 minutes practically guarantees you’ll find a bike shop. Most do sell used bikes, and that’s important. Nearly everyone in Amsterdam rides around on heavy, one-speed cruiser bikes that look retro and shabby. They call them Omafiets (granny bikes) and you’d think they would be really cheap, but they aren’t, unfortunately. They are mostly locally-made and very sturdy, so they tend to last a long time.

Find a bike shop selling used bikes and the lowest priced ones will be around €90 to €100, which seemed outrageous to me for a used bike with no extras, but that’s what they cost. You can buy a good used one for around €100, and then sell it back to the same shop in a week or two for €80 or even more. Keep your receipt and ask them if they’ll buy it back before you complete the deal. Chances are they’ll be happy to and they do this a lot.

So for €20 or less, you can ride around on a bike for probably up to a month, which is obviously far cheaper than renting one, but you have to consider security. That same bike shop will charge around €40 for a good lock and chain, but there is another way.

Buying a good lock at a discount

Go to the market at Waterlooplein or Albert Cuyp Straat and you can find similar locks for around €15. They have even cheaper ones, but you might as well just give the bike straight to a thief if you use one that can be cut with normal shears.

The locks starting around €15 should be good enough as long as you are sure to use them properly. But check the lock and key mechanism and try it out a bunch of times. Some of them are sturdy, but the lock gets jammed up and becomes hard to use very quickly. If you ask the sales person about they they’ll steer you to a dependable one, still in a good price range.

When you are ready to leave the city, ride back over to the shop where you bought it with your receipt, and you’ll be walking away with cash. And especially if you asked them about it in advance, chances are you’ll get a very good price because they know the bike met their standards to resell just a week or two earlier. You can try to sell the lock back to the place where you bought that, and you’d be lucky to get half your money back, but even if you have to give the lock away you have still saved money.