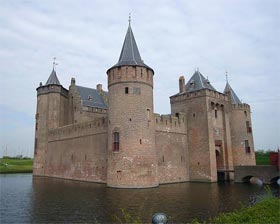 Particularly for visitors from North America, Amsterdam already feels like a museum with its perfectly preserved 17th Century architecture filling the city center, but those wanting to take it a step further might be happy to know that they can visit a real castle that dates back to the year 1280 just at the edge of the suburbs. There are actually several hundred castles remaining in the Netherlands, and many of those aren’t too far from the capital, but Muiderslot Castle is the closest and best set up for a quick day trip from Amsterdam.

The current castle actually had to be rebuilt starting in the late 14th Century, and it’s gone through a long series of private owners over the years, including Pieter Corneliszoon Hooft, who was the 17th Century poet and playwright for whom Amsterdam’s ritziest shopping street was named. It had fallen into disrepair by the late 19th Century when it was purchased by the government to be restored and opened as a tourist attraction. It’s recently celebrated 125 years in this role, and the castle is still filled with furnishings, artifacts, armor, and weapons from its 17th Century heyday. Even just from the outside the Muiderslot Castle sitting inside its picturesque moat is a worthwhile attraction and photo opportunity for those who’ve not yet been to many European castles. There are also impressive gardens just outside the castle, which are quite nice in season. 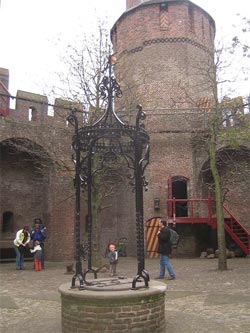 The official Muiderslot Castle website is in both Dutch & English, as well as German, French, and Spanish. Guided tours of the castle are available in English, when English speakers turn up (many of the tours may also be in Dutch, but if there are English speakers there the tour will be bilingual at the very least). Tours leave about twice per hour and last about 45 minutes before depositing you in the gift shop. Once an additional cost to the entry fee, tours of the castle are now included in the price of your admission – the tours are well worth it on your first visit as they are the only way to access many of the upstairs areas.

There are two different self-guided tour routes within the castle grounds. The Tower Route and the Knight Route are available on free maps for those adventurous enough or impatient enough to skip the guided tours. You can rent an audioguide for €3.50 to explore these tours.

From April through October the castle is open daily, and from November through March it’s only open for tours on Saturdays and Sundays.

Getting to Muiderslot Castle

The castle is located in the village of Muiden just on the Ijmeer Lake, about 15 kilometers southeast of Amsterdam’s city center.

Driving – Take the A1/E231 toward Almere/Amersfoort and take Exit 3 and follow the signs for the castle.

Bus – First you need to get to Amstel Station, which is about 2 kilometers south of the Waterlooplein Flea Market and Rembrandtplein, near the east bank of the Amstel River. Many trams and buses go there, as does the Metro on the 2nd stop past Waterlooplein or the 4th stop from Centraal Station. Once at Amstel Station you can take bus 101, 152, or 157, which will put you right in the heart of the village of Muider. Since the bus stop is a couple hundred meters down the road the castle is located on, it’s a good idea to tell the bus driver that you are visiting the castle and they’ll make sure you get off at the right place. The bus journey only takes about 15 minutes from Amstel Station, and buses leave about every 15 minutes during the day as well.

For specifics on how the buses and fares work see the main Amsterdam public transportation page. The fare from the city center to the castle is 4 strips, or if you are starting at Amstel Station it’s only 3 strips.