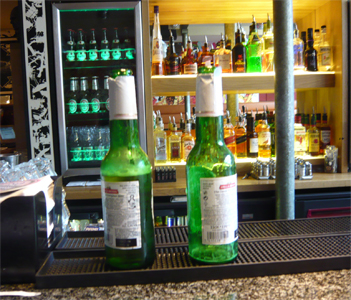 Amsterdam deserves its reputation as one of the great party cities of the world. The perception that “anything goes” is mostly due to the infamous Red Light District as well as the even more infamous coffee shops of Amsterdam where cannabis is sold and consumed in public, but this is a big drinking city as well. Thousands of party-heads stream into Amsterdam every weekend, and one of the best ways to get the party started in a hurry is pouring some cheap drinks down your gullet early on.

Drinking in Amsterdam isn’t as expensive as in, say, Paris or Dublin, but it’s not what you’d call cheap either. A pint of beer will usually cost between €4.00 and €4.50 at nearly any bar in the city, so any relief from that is very welcome. Below are some of the better happy hours in the city, as well as the real cheapskate’s trick for getting drunk here with limited funds.

This is part of the Cheap Amsterdam guide.

Belushi’s Bar in the Winston Hotel
Warmoesstraat 129, in the Red Light District

Unless you are staying at this popular hotel/hostel you probably wouldn’t even think to enter the bar, which is basically the entire ground floor of the place, but that would be a mistake. It’s a fun and popular place with many TV screens showing satellite sports, and they have 2-for-1 Beck’s Beers (€4 for 2 bottles) every day until 11pm. They also have 2-for-1 vodka drinks and Jaeger shots every evening between 7 and 11pm, I believe, and they’ve also got free wifi.

This has the feel of a dive bar, except the music in the evenings usually consists of drum & bass and other electronica, and even live DJs on weekends, though no dance floor. They have hotel rooms above as well as a proper coffeeshop next door, yet the place is quite popular with locals. Every evening from 9pm to 11pm they have pints of Dommelsch Beer for €2.60 instead of the normal €3.50 price. As of late 2008 this is one of the very few bars in Amsterdam where you can smoke cigarettes or weed while drinking, and they’ve also got free wifi.

This large bar can get really raucous at times, partly owing to the fact that it’s on one of the red light streets in the Red Light District, so much of the crowd is fired-up men. They have a split happy hour every night from 4pm to 6pm and also from 10:30pm to 11:30pm, and beers are €2.50 a pint.

This is another place you are unlikely to even know about unless you are staying at this busy and popular hostel, but their bar is a crowded and fun hangout, which is smoke friendly, and they have pints of beer for €2.60 every night between 8pm and 9pm, as well as specials on wine and shots.

This is the most remote happy hour of the tourist places, and not worth traveling to unless you are staying in this area, but there are plenty of budget hotels around here so if you are in the neighborhood it’s worth stopping in. They have a busy and fun bar with a popular happy hour that runs from 4pm to 5pm, where beer, wine, and vodka drinks are 2-for-1, and their prices are pretty reasonable to begin with so this is a great place to get hammered before evening even arrives. 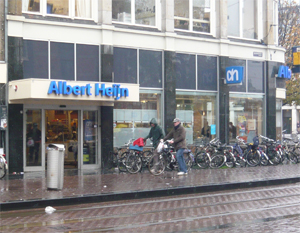 Buying beer or wine from supermarkets is the cheapest way to go, but finding them in Amsterdam isn’t as easy as we’d like. The chain called Albert Heijn has a near monopoly on groceries in the city center, and there are several locations near the hotel districts, though they can sometimes be challenging to locate. The one just next to the Magna Plaza, which is behind the Royal Palace on Dam Square is the easiest to find. There’s also a Gall & Gall wine shop right next to that one, which offers a much larger selection and slightly better prices than Albert Heijn itself.

Beer in these stores sells for around €1 per half-liter can in a 6-pack. Amstel is usually a bit cheaper than Heineken, but prices don’t vary much. Wine starts around €3 per bottle, and is better than you might expect at that price. The biggest challenge is that the beer is usually sold warm in most Albert Heijn stores, though some of them do have refrigerators.

Rather than make complicated maps here, it’s easiest just to ask at your hotel where the nearest supermarket or wine store is located, and you’ll almost certainly be given directions to the nearest Albert Heijn.

Another option that isn’t quite as cheap

The Albert Heijn chain has recently started opening smaller stores in high-traffic areas called Albert Heijn To Go. These are basically like convenience stores, selling mostly prepared foods and other things people on the go might need. They do sell beer and it’s usually cold, but prices are nearly double their main stores, so expect to pay around €2 per can or bottle. There is one in Centraal Station, on just off Rembrantplein, and another near Leidseplein. The saving grace is that they stay open late, sometimes until after midnight.