Cheering Holland On at the World Cup 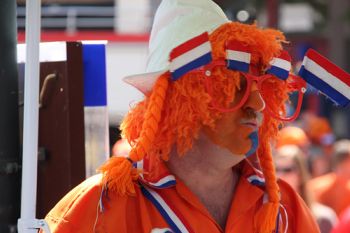 There’s nothing quite like cheering for your favorite country in a competition – no matter what the sport – but the cheering seems to be especially vigorous when the games in question only happen every four years. And I’m not talking about the Olympics in this case, either. I’m talking about the World Cup.

It’s the biggest sporting event in the world, and the 2010 tournament is only a few months away now.

Holland is a regular competitor in the World Cup, and they reached the final twice – in 1974 and 1978. Unfortunately, they came in second on both occasions. Still, Dutch players are often singled out wherever they play in the world for their style, finesse, and skill – so it’s not surprising that when the players of this admittedly small country come together they aren’t to be taken lightly by much larger nations.

We’re still counting down the days until kick-off of the first games in the 2010 tournament, but you can get psyched up for the event in style, in a few ways.

First, stay up to date with the latest Netherlands World Cup news – find out who’s playing well for their respective clubs, and know what team gossip is popping up. Not only that, you can also participate in the lively discussions that take place on that site between ardent fans of the Oranje.

Second, before the tournament starts on June 11th, be sure to print off your own copy of the World Cup wall chart to keep track of the Netherlands’ progress. I won’t say it’s just like being there, because it’s not, but filling in the numbers on a wall chart as the days go on certainly makes the tournament easier to follow (especially in the group stages).

Finally, and perhaps most importantly, get thyself a Netherlands soccer jersey. I understand that not everyone fancies the color orange, so those of you who’d like to support the Oranje without wearing the Oranje will be pleased to know that the Holland away jersey is a stately combination of white, red, and blue – the colors of the Netherlands flag.