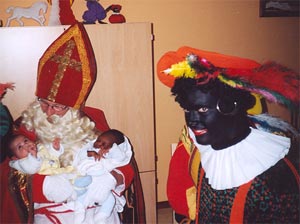 If you will be visiting Amsterdam in December you’ll have two separate shots of getting mixed up in the local Christmas-style celebrations. Interestingly enough, the first one peaks on December 5, and it’s the one children anticipate more than the later one that falls on Jesus’ birthday.

The Dutch holiday season begins with a bang in mid-November when Sinterklaas (actually the fellow who inspired the creation of Santa Claus) arrives by boat from Spain, to a different city in the Netherlands each year, in a big ceremony broadcast live on television. Like Santa has his elfin helpers, Sinterklaas has helpers too, but these guys are full-size and sport blackface makeup.

They are called Zwarte Piet, which translates to Black Peter, and this long tradition has recently come into question as possibly being politically incorrect. Some have assumed that the blackface tradition signifies Dutch colonial slaves laboring for their beloved Sinterklaas, while others point out that the makeup is only meant to signify soot from their trip down the chimney on their way to deliving gifts.

The Feast of Saint Nicolas takes place on December 5, celebrating Sinterklaas’ own birthday. Families make a point to get together and children receive their largest haul of gifts of the year. Traffic on the Dutch highways often gets jammed as families maneuver their way about the country trying to be together on time for the evening’s gift exchange and gluttonous feast.

On December 6 the Sinterklaas decorations come down and begin to get replaced by Christmas decorations. Even though North American Santa Claus is evidently based on the Dutch Sinterklaas, that hasn’t stopped them from competing during December. Kerstman is what they call the Christmas version of Santa Claus in the Netherlands, and he appears on December 25 for a slightly lower key version of gift exchanges.

Many Dutch children receive a second round of gifts, but Sinterklaas is definitely the bigger deal and the one kids anticipate most. Kerstman has been gaining in popularity, but still only about half of Dutch families do gift exchanges at the end of December.

Unlike many countries that key on Christmas Eve as the major event, the Dutch celebrate two full days of Christmas on December 25 and 26. They are known as First and Second Christmas Day, and families get together for more feasts as well as carol-singing and special games.

Many Dutch families do go to a church service on Christmas Eve, but family get-togethers are definitely the highest priority of the season. For visitors and expats there are plenty of church services happening on Christmas Day as well.