Expert Tips on Renting a Bike in Amsterdam 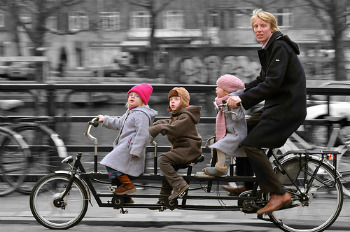 As has been mentioned before on this site, despite the fact that Amsterdam is full of bicycles that may not be the ideal way for every traveler visiting the city to get around. Think of it this way – if you lived in a place where your daily driving commute was constantly being interrupted by people who didn’t know the rules of the road and were going at a snail’s pace just because they were on vacation, it would probably make you a little crazy. Such is the case with Amsterdam residents for whom their bicycles are like cars in America – disrupt the commuter pace and you’re definitely not making friends.

Still, if you’re planning a cycling excursion outside the city on a given day, or if you’re planning a longer stay in Amsterdam and will actually be biking at something other than vacationer’s speed, renting a bike in Amsterdam is a great idea. It’s an excellent way to get around, especially to destinations just outside the city, and really pleasant in nice weather. What’s more, it’s a fairly inexpensive proposition to rent a bike.

But if you’re not already intimately familiar with the bike culture in Amsterdam, the first thing you’ll want to do is do a little homework so you know what you’re getting into and how to make sure your cycling trips through the city don’t end in bent metal and scraped knees – which is why a recent article on BootsnAll called “The First-Time Guide to Renting a Bike in Amsterdam” is such a great resource.

The article’s author, Abbie Mood, talks in detail not only about what you need to know when you’re renting a bike (including what you need to present to the shop in order to rent a bike and what the shop will require of you if the bike is stolen), some important bike safety tips (including what signs to look for to indicate bike paths), and some options if you’d like to take a bike tour of the city along with your bike rental.