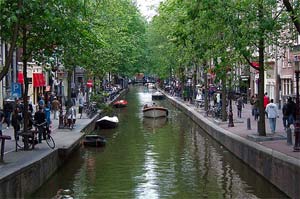 “Marco” yells Peter Shewchuk. “Polo” returns a distant voice, as Shewchuk begins swimming in a determined beeline through New York’s East River toward his training partner. Some find it remarkable that these wetsuit-clad warriors train at least six hours every day, but in the fast-growing sport of Extreme Marco Polo there is no time to rest if you are the reigning US champion and you want to stay on top.

This summer the world championships of Extreme Marco Polo will move to the canals of Amsterdam for the first time since the event begun in 1982. The traditional home of the event has been in Venice, Italy, and officials there reacted swiftly to this week’s announcement of a venue change. “The biggest event in the sport of Extreme Marco Polo deserves to stay in Italy, and we will go to great lengths to bring it back next year, “ said Italian committee chairman Aldo Nova.

Dutch officials were jubilant at the news, as event organizers were seen jumping in the air and clicking their wooden shoes together in celebration. The 2008 Extreme Marco Polo World Championships will begin at 10 a.m. on June 31 in front of the Anne Frank House in the Prinsengracht canal. Organizers chose that symbolic location due to the fact that Anne Frank herself was a known enthusiast of the sport and mentioned it frequently in her best-selling diary.

Shewchuk will be representing the United States for the third year running, and William Hill bookmakers in London have him as the 3 to 1 favorite for the 24-person event, closely followed by Estonian champion Chuck Kuehhas and Irish star Matthew O’Connor. Shewchuk captured the US title at the American finals on the canals of Fort Lauderdale in January, where he famously called 14 consecutive correct ‘fish-out-of-waters’ to set a new world record.