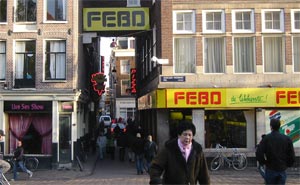 Dutch cuisine is not a big draw for visitors to Amsterdam. In fact, it’s hard to even sort out what Dutch cuisine actually is, even for the locals. They have the herring shops all over the country, but those are all over northern Europe as well. There are pancake restaurants, but some variation of pancakes is available all over the world. One thing the Dutch do have that is uniquely their own is a bizarre chain of small shops called FEBO, with 22 locations in Amsterdam alone.

Their bright yellow, red, and green signs stand out in a city that tends to be decorated in muted colors. By the way, the name is pronounced FAY-bo, not FEE-bo, and their hard-to-read slogan on each sign – de lekkerste! – means “the tastiest!” in Dutch, or so I’m told.

The irony of that slogan is that they are anything but the tastiest, but FEBO does provide an important service: They are open later than anything else in a city that tends to close early, or at least the key locations in the main drinking neighborhoods do. FEBOs in the Red Light District (pictured above), Rembrandtplein, and Leidseplein areas all stay open until 3 a.m. on weeknights and 4 a.m. on Fridays and Saturdays. 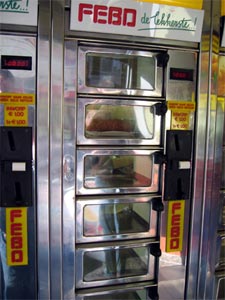 The most unusual thing about FEBOs is they are each dominated by a large automat, which is filled with small food items that can be yours if you put the right combination of coins in the slot. FEBOs also sell sub-standard hamburgers and fries, cooked to order, but you’ve got to try the items from behind the windows to get the full affect.

For prices ranging from €1.20 up to €1.50, you can choose an item that has been deep-fried beyond recognition. Most of them are krokets, which does actually seem to be a specialty in this region (McDonalds here sell McKroket burgers, but try these instead). You’ll find out soon enough that a kroket is actually a thick gravy or ragout, that is covered in breadcrumbs and then deep-fried. They are also delicious, even after sitting in the little compartment for an hour or so.

There are two things that make dining on a FEBO kroket a bit challenging. One, the machines only accept coins, and they don’t give change. Each FEBO has change machines, including ones where you put a Euro coin in and small change comes out, so this obstacle is easily overcome once you are aware of it. The other tough thing is that all the signs are in Dutch, and none of them are easily-translated into English by the casual observer.

So the peckish tourist is usually dining in the dark, just hoping things turn out okay. The good news is that the Dutch don’t eat Guinea Pig or testicles or pig ears or any other strange animal part. And regardless of what the kroket is made of, they tend to taste the same anyway, so drop some coins in the slot and enjoy. One word of warning though – similar to the Vlaamse Frites (French fries) sold all over the city, these tend to be core-of-the-sun hot when you bite in, even if they’ve been sitting in that little compartment for a long time.

You’ll forget this in the heat of the moment, but just to decode the FEBO signs and assure you that it’s all safe to eat, here are the main krokets on offer:

That’s right, no vegetarian choices if you aren’t willing to eat cheese, except for the French fries.

When you ask Amsterdam locals about FEBO they’ll almost all say that the food is terrible and only tourists eat there, but you realize that’s not true at all when you visit for yourself. Especially late at night, the space in front of each FEBO is occupied by armies of drunken Dutch guys, and a few girls too. During the day the scenery in front is usually bands of opportunistic pigeons, who seem to actually like FEBO food as much as I do.

Have you eaten at FEBO? What did you think? Am I crazy because I think these mysterious little deep-fried bundles of joy taste damn good after a dozen Heinekens or so. Maybe I was too harsh on their slogan – maybe FEBO is de lekkerste?