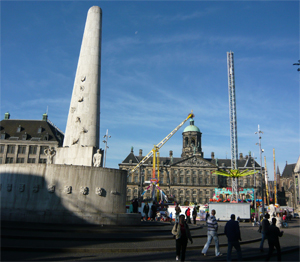 I’ve long been a proponent of Amsterdam’s ubiquitous one-hour canal cruises as the best way to see a lot of the city in a hurry, and those are still worthwhile themselves, but after experiencing the New Europe free Amsterdam walking tour recently I now will wholeheartedly endorse this as your best first option. Before going on too much further, they aren’t really “free” but rather are 100% tip-based, so you pay what you think it’s worth at the end, and only the cheapest person will think this tour isn’t worth any tip at all.

This is part of the Amsterdam Cheap Guide.

In 2004 a fellow named Chris Sandeman launched the first of these tours in Berlin, based on the idea that if a company keeps its overhead low it can prosper with introductory tours on a tips-only basis. The Berlin tours are extremely popular, and I’m happy to mention that after doing these tours in 5 different cities (Berlin, Paris, London, Edinburgh, and Amsterdam) they seem to be going well all over. In addition to these cities the New Europe company also holds these free tours in Hamburg, Jerusalem, Munich, and Tel Aviv, with more cities coming soon, I’m told.

Currently there are free tours in English twice per day, at 11am and 1pm, with a Spanish tour also leaving at 11am from the same spot. Check the official New Amsterdam Tours website and/or the maps and fliers in hostels for current information. At 11am a guide will meet the assembled group in front of Centraal Station, and then lead them a few blocks down to Dam Square, where the tours officially begin in front of the obelisk-like National Monument. 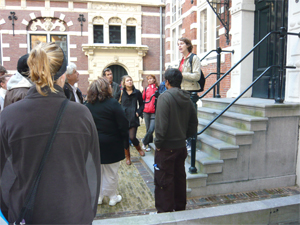 After dividing up between English and Spanish speakers, the tours each get a guide, and if there are more than 40 people in one group there will be another group that each gets its own guide. In Berlin there must have been 4 English-language groups going out at once, but so far the Amsterdam tours normally only go out in one or two groups in each language. After a short introduction from the guide they will mention that this is a tips-only tour, and then nothing is mentioned about this until the end of the tour, about 4 hours later.

The tour itself goes at a fairly brisk pace, with walks of usually 3 to 5 minutes between each stop. Once the group is gathered together again the guide explains the surroundings while adding interesting facts and stories about each location. Compared to a bus tour or even the canal cruises, these tours get in far greater depth, and since the pace is dictated by group itself instead of traffic patterns, you are sure to get the full story before moving on.

The walk in Amsterdam covers the historical center, including the Red Light District, as well as parts of the outer canal belts and the Jordaan neighborhood. There is also a 30-minute lunch stop, which I could have done without, but at least the stop is in the excellent La Place on the Damrak, and those who aren’t hungry have plenty of options for filling that break.

How much should you tip?

The amount of how much to tip is completely up to each person, but I’d say figuring around €5 per person is a good place to start. If you are a backpacker surviving on noodle soup at the hostel, then €1 or €2 would be appreciated by the guide, and I’m sure they’d rather you do the tour instead of skipping it to save the meager tip. These tours tend to be fairly social, so the more the merrier.

I’d like to hope many people will dig a bit deeper, and even offer up more than €5 per person if your budget allows. This is an experimental business model that is an excellent resource for budget travelers, and if too many people are too cheap about it, the tours will cease to exist. The guides make it clear at the beginning that this is a job for them and not some internship or city program. I’m sure none of them figure they’ll get rich giving these tours, but if they can’t make enough to justify spending half a day with visitors then it’ll all soon be over. The guides also must pay the company a small amount for each person on their tour in order to help cover the overhead, so if the tips are very small they could potentially make nothing.

The daily free tours are the most popular, but the company also gives Red Light District tours each evening. The ‘Red Light District Exposed’ tour is 2 hours long and costs €10 per person, which is also a great deal and is an excellent way to learn about this controversial area without feeling unsafe or too creepy.

They also offer a pub crawl (nightly except for Saturdays) that is partly through an affiliated company. For €20 you’ll visit 6 different bars with a lively group, and if the drink specials at each location aren’t enough, you’ll also get loads of free drinks and shots before and between each stop, so you’ll make plenty of friends and get as drunk as you want to for a minimal fee.