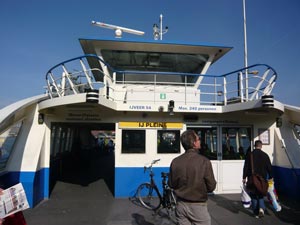 Of all the free things to do in Amsterdam, this probably doesn’t even deserve to be in the top half of the list, but depending on where you are from this might be an interesting way to spend an hour or so, and again, it’s totally free. Amsterdam and everything you’ve heard of in the city is in the larger southern portion of the town, but there is a district across Het IJ (the river IJ) that is mainly residential, and free ferry services take you from just behind Centraal Station across the river several times per hour during the day and well into the evening.

With the exception of the unique Botel, which is now anchored in North Amsterdam so its guests need to use the free ferry service to go back and forth, there isn’t really anything too major that you’d want to see across the river. As mentioned, this is a mainly residential area, and parts of it are fairly nice, but the ride itself is really the main attraction for visitors, especially those on limited budgets who are looking for ways to entertain themselves.

Getting to the ferries 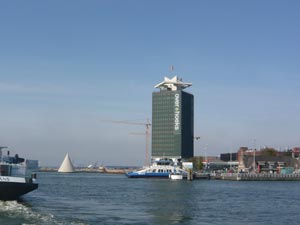 When you arrive at Centraal Station, whether it’s by train or on foot from the city center, just go in the opposite direction of the city, and out the back exit. If you are facing the water, you’ll need to head just a bit left once you get close, and you’ll easily spot the ferry landing.
There are three different destinations, with one going more or less straight across the river, and the other two going right or left to some degree. If you want the quickest free mini-cruise you’ll take the center boat.

The three routes from Centraal Station

pdf map of the ferry routes

Getting on the ferries

Unlike more elaborate ferry services, these are dual-headed people and bicycle movers that could not be more basic. There is no fare for anyone, so just jump on board and watch the clock for when it leaves. You’ll be getting off from the front of the thing, so just shove your way forward and join the locals.

If you are feeling adventurous and/or have more time to kill you might want to walk around the neighborhood once you arrive, but if not you can certainly just go right back on the ferry you came on. This makes for a fast and easy tour of the harbor area, and it’s also something that a very small percentage of visitors to Amsterdam are even aware of, much less actually do.

Some who live in North Amsterdam have a great deal of pride in their mellow neighborhood, and it’s quite convenient to reach it from the city center so it does offer quite a nice alternative to the madness of the rest of the city, but again, there isn’t much to do or see, so it’s probably not worth exploring unless you’ve got quite a bit of time on your hands and not much money.