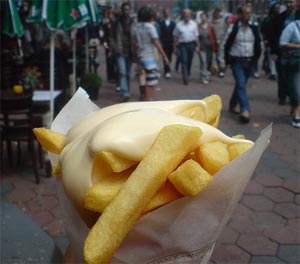 You probably remember the conversation in Pulp Fiction about the French fries in Amsterdam, where they discuss that the most common condiment served with them is mayonnaise. Not only is that true, but French fries are an obsession in the Netherlands and it’s difficult to find a restaurant in Amsterdam that doesn’t serve them. When deciding what to eat in Amsterdam, it’s hard to avoid these things, and you really wouldn’t want to anyway.

As you walk through the city you’ll notice many little take-away shops whose primary decorations are oversized cartoon depictions of a bag of fries. Some of them also serve falafels and other Middle Eastern food, but many of them do their primary business selling these salty high-carb treats. You’ll never have to walk more than a couple of blocks to get your fix, even late at night.

But before we go on, let’s get oriented. A couple hundred years ago, in what is now Belgium, some genius decided to slice up some potatoes and then deep fry the slivers. The Brits call them “chips,” the French call them “pommes frites,” and for some reason the Americans call them “French fries.” But in the Netherlands and Belgium they call them “Vlaamse frites” and they eat them like there is no tomorrow, or at least no such thing as high cholesterol. Vlaamse frites literally means “Flemish fries,” correctly attributing them to the northern Belgium region of Flanders.

They are served in a paper cone in Amsterdam, and that’s handy because they are always about a million degrees inside when they are handed to you. Biting right into one is a great way to sear your taste buds shut for the next few days. You’ll also get a small plastic fork, which becomes important nearer the bottom of the cone.

Most places serve 3 or 4 different sizes of Vlaamse Frites. The smallest size is still larger than a “small” at a McDonalds, and they are usually around €2.00. The largest is literally a meal-size cone and can be all yours for around €3.50, but you are not done yet. Just as crooked car salesmen try to sell you undercoating and other mysterious add-ons, the Vlaamse Frites also have options.

The majority of places will have about 5 different sauces available, and some will have as many as 10. Yes, the delicious and very rich-mayonnaise is definitely the most popular and the one you should try for sure, but they also offer things like curry sauce, garlic sauce, tartar sauce, chili sauce, ranch dressing, feta cheese, gravy, and yes, even ketchup for those whose tastes haven’t progressed since they turned 8. The sauces are usually 25 to 50 cents each (some 75 cents though) and most people just choose one, although drunken thrill-seekers sometimes do pile them on. 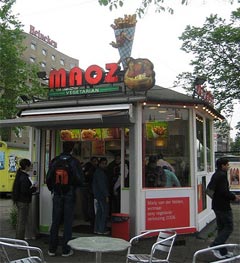 Most locals claim the best Vlaamse frites in Amsterdam are at one of two small shops, but to be honest they are all pretty close. Avoid the Vlaamse frites served at the FEBO automats, and obviously don’t try to get them at McDonalds or Burger King. I’ve found the Maoz chain to be reliable, and their falafels with the “free salad bar” are pretty good too.

As with nearly any other restaurant choice, it’s good to pick a place that’s busy over one that is dead. High turnover equals freshness, but that can be a bit deceiving in the world of Vlaamse frites. All the shops in Amsterdam use the same two-step cooking method. The thick potato wedges are initially deep fried at a low temperature for a while to cook the inside to a pleasant doneness. Then the guy will unceremoniously toss these half-cooked frites onto a steel grill under a heating lamp until somebody orders them. You’d be forgiven for thinking you are getting old Vlaamse frites as you watch the guy toss your desired amount into the oil again before giving them to you, but this Phase Two is a vital part of the process. The second dip is in very hot oil, and in only a minute or so the outsides become crisp and delicious while the inside stays tender and somehow gets as hot as the core of the sun in the process.

Bon appétit, but give ‘em a couple minutes to cool first. And you’ll figure out why that little plastic fork is handy when you get past the halfway point.