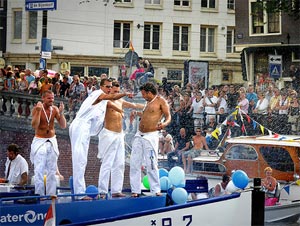 Amsterdam is known for its tolerance and open-mindedness, so it should be no surprise that it has a thriving gay scene. Amsterdam’s gay culture is famous throughout Europe and the world as being proud and in the open. Instead of one lonely alley where the clubs and bars are huddled together, Amsterdam has many recognized gay districts that are alongside or even directly within the other entertainment districts.
The main gay districts
Warmoestraat – This long pedestrian-only street runs parallel to Damrak through an edge of the Red Light District. There are many coffeeshops and straight bars along this party street, and a few leather bars, a disco, and several saunas mixed right in.
Rembrandtplein/Reguliersdwarsstraat/Amstel – The Rembrandtplein is home to most of the city’s most glamorous clubs that welcome a mixed crowd, but the nearby streets of Reguliersdwarsstraat just to the west, and Amstel to the north, are heavily concentrated with gay clubs that mostly match the glamour of the rest of the neighborhood.
Kerkstraat – This street near Leidseplein is the oldest gay district in town and home to several gay hotels. It’s not as trendy as the Rembrandtplein areas or as wild as the Warmoestraat area, but it does have a comfortable feel that has attracted visitors for decades. There are bars, clubs, and saunas concentrated in the main stretch of this street.
The gay welcome and information center
Amsterdam is unique in that it has a special gay and lesbian information center and souvenir booth open all year called Pink Point. It’s located in the city center near the Anne Frank House at the corner of Keizersgracht and Westermarkt. There is a helpful staff of volunteers on hand from 10 a.m. to 6 p.m. to answer all your questions about gay and lesbian culture in Amsterdam.
The Pink Point booth is located next to the world famous Homomonument, which was dedicated in 1987 to inspire and support gays and lesbians in their struggle against denial. This is said to be the only permanent gay-themed monument in the world.
Pride events
Amsterdam hosts a world famous gay pride canal parade on the first Saturday in August. About one hundred boats are decorated with dancers and singers aboard as they slowly cruise through the cities canals as hundreds of thousands of spectators look on.
Exclusively gay hotels
There are many gay-run and gay-friendly hotels in Amsterdam, and in addition there are at least two exclusively gay hotels:
Hotel Orfeo Amsterdam is the larger of the two with 35 rooms, and has been operating since 1969. It’s near the Kerkstraat gay scene and also conveniently located near Leidseplein and the Museum District.
Hotel the Golden Bear was the city’s first exclusively gay hotel, opening in 1948. It’s located in two historic 18th century buildings on Kerkstraat, and has 17 rooms.