Getting from Amsterdam to Copenhagen (and return) 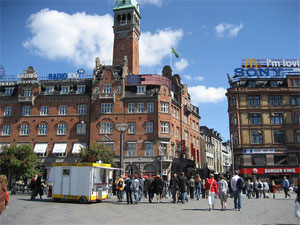 Two of Europe’s finest cities are quite far apart, but since there aren’t many major highlights between them, Amsterdam and Copenhagen often end up back to back on many itineraries. Actually, Hamburg is pretty much between these two and it’s worth a day or two if you have the time, and it also makes a train or bus journey less brutal. But if you are determined to connect these two cities then you’ve got the normal three options.

Don’t forget that Copenhagen is located on an island and that even if you go on a bus or train then you’ll have that slow section on the ferry in between. You don’t have to book your own way across or anything, but it is a bit slow and it also keeps you from sleeping easily.

The bus and train each take around 14 hours and go overnight, so if that sounds okay to you then at least they can be done cheaply as long as you book in advance. You can also sometimes get cheap flights between the two cities, so it’s worth checking that if you know your travel dates far enough in advance. Getting cheap tickets in Europe almost always means booking well ahead. 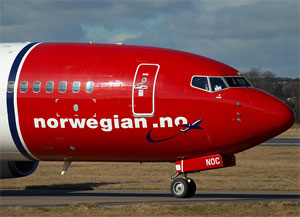 Thanks to Norwegian Air and the fact that Copenhagen is one of their hubs, you can often get cheap nonstop flights between these two cities. The journey takes about 90 minutes, and KLM and SAS airlines also both do nonstop flights, but usually for quite a bit more money.

If you can get a Norwegian Air promotional fare you can go one-way starting around €65 and round-trip for only a bit more, around €80. Of course, airfares change on a daily basis so you’ll have to use that widget on the page to search your own dates, and you might even find a cheaper price if you get lucky. Finding cheap flights can be easy one day and impossible the next, so you need to start searching early and keep track of prices.

The main advice here is that unless a 14-hour ground journey sounds fun to you, book a flight as far in advance as you can.

Trains from Amsterdam to Copenhagen 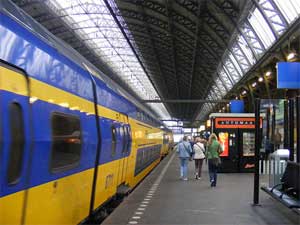 This is a fairly popular route so they have a special night train that goes between the cities every night. But yeah, it takes around 14 hours each way so it’s no picnic.

Promo fares start at €29 each way and €58 round trip, but those can sell out early so your cheapest seat might be €49 or higher each way.

It’s an overnight journey and this is just for a normal seat. You can also pay €20 more for a bunk in a 6-bed couchette cabin, or a bit more for a bunk in a 4-bed cabin. If you don’t sleep well in normal seats then this is probably money well spent. You’ll obviously be saving a night in a hotel or hostel, so the bunk might be worth it. As you certainly know already, hotels in Europe are rarely cheap, especially in the north like this, so €20 extra for a good sleep is a nice deal.

You can find tickets and book them on the Dutch International Trains site. You can also buy tickets in person at the train station on either end, but you might end up paying quite a bit more if the promo fares are gone, and during busy times of the year they definitely will be gone by the day of travel.

In both directions the train leaves around 7pm and gets in around 10am outbound in the other city. A few hours outside of Copenhagen your train carriage will be loaded onto a ferry and will be loaded off again on the other side, to resume the train journey. This part makes it difficult to sleep, so keep that in mind.

Buses from Amsterdam to Copenhagen 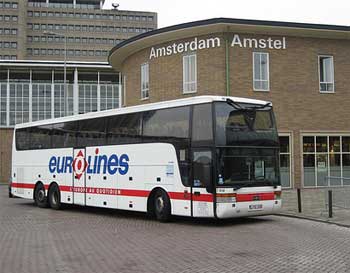 Eurolines runs buses between these two cities 5 days per week. The trip also takes 14 hours since the bus is slower but the loading on and off the ferry is faster. You’ll have to change buses in Hamburg about halfway between, and that’s another reason you might consider stopping there for a day anyway.

Promo fare starts at €29 each way for any age, and if you can’t get that promo then the normal price is only a bit higher. If you are going at the last minute the bus will be cheaper, but otherwise you might enjoy the train more.

The bus leaves at 11:15pm most nights, changes in Hamburg around 7 hours later, and then gets into Copenhagen around 1:20pm. Eurolines buses are fairly comfortable so this isn’t a terrible ride, but changing in Hamburg does mean you won’t be getting as much sleep as you might like.

Check prices and buy tickets at the Eurolines site. It’s a mess and fairly hard to use, and you’ll probably have to type Kobenhavn into the search box to get Copenhagen prices.

From Amsterdam the bus leaves from in front of Amstel Station in Amsterdam, which is about 2 km south of Centraal Station, and easy to reach by tram or metro.