Getting from Amsterdam to Delft (and return) 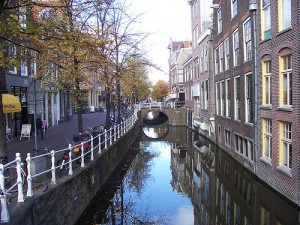 Delft is an unspoiled, traditional Dutch town, which preserves the architecture and is famous for the blue and white ceramics. The oldest canal is called The Old Delft and later many were dug as life lines in the city.

There are two airports located close to Delft: Amsterdam Airport Schiphol is 45 min away by train and Rotterdam The Hague Airport is only a few km away but has no public transport connections.

Whether you need to travel from Amsterdam to Delft, or you need to get directly from Schiphol to Delft, it’s a good idea to know what to expect in terms of means of transport available and how much it would cost.

The only public transportation option between Amsterdam and Delft is the train, which takes about an hour.

Trains from Amsterdam to Delft

You can view the schedules and book the tickets via the NS website . There are trains from Amsterdam Centraal to Delft daily and they leave every 30 minutes. You will have to change at Leiden Centraal. The total travel time is 57 minutes. The single 2nd class fare is €12.40. Trains also run during the night.

Should you need to get from Delft to Amsterdam Airport, then there are direct trains daily and they leave every 30 minutes. The travel time is 56 minutes and the single 2nd class fare is €8.70.

Driving from Amsterdam to Delft

Considering the short distance between Amsterdam and Delft – 69 km – you can rent a car and drive via A4. The travel time is about an hour.

Should you need to get from Delft to Amsterdam Airport , you’ll also take A4 and drive the 49 km in about 37 minutes.