Getting from Amsterdam to Hague (and return) 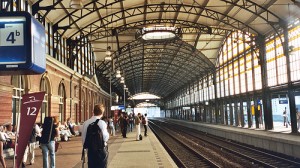 The Hague (Den Haag, Dutch) is the seat of the Dutch parliament and government , as well as the residence of Queen Beatrix, but it’s not the capital of Netherlands. That honor is reserved for Amsterdam. The Hague is located on the shores of the North Sea and is home to Scheveningen, the most popular seaside resort.

It is totally different than Amsterdam; instead of canals, it has streets and avenues; instead of typical 7th-century step-gabled houses, it has 18th-century mansions in baroque and classicist styles; in short, it has a more continental feel than the capital.

The only public transportation option between Amsterdam and The Hague is the train, which takes about an hour and costs little more than €10.

Flights from Amsterdam (airport code: AMS) to the Hague

Amsterdam Airport Shiphol (AMS) is the biggest and busiest airports in Netherlands and also one of the biggest travel hubs in Europe. It is located about 9 km from the city center and is hub for Amsterdam Airlines, Arkefly, Corendon Dutch Airlines, KLM, Martinair, Transavia, Tristar Air and Vueling.

Rotterdam The Hague Airport (RTM) is the third largest airport in Netherlands and serves Rotterdam and The Hague. It is hub for Transavia.

Considering the short distance between the two cities (70 km), there aren’t any direct flights between the two airports and connecting flights start at €218 per person, one way on KLM, during late fall. Slightly cheaper airfare can be booked for spring (March 2012), starting at €197 per person, one way on Air France. The total travel time is 3h 40 min.

>>read more about Flights to Schiphol

Trains from Amsterdam to the Hague

The trains between Amsterdam and The Hague are operated by NS . When you search for timetables and want to book a ticket, make sure to use the Dutch name of the city (i.e. Den Haag). Trains depart Amsterdam Centraal daily, every 30 min. The first train departs at 5:41 a.m. and the last is at 00:40 a.m. The travel time is about 50 min and the single adult 2nd class ticket is €10.20.

Driving from Amsterdam to the Hague

You can rent a car and drive the 70 km between Amsterdam and The Hague in about an hour via A4.