Getting from Amsterdam to Stockholm (or the other way around) 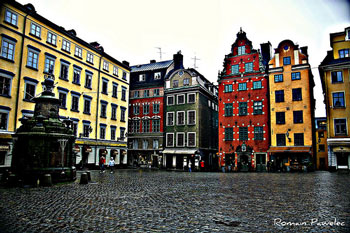 As two of the bigger and more famous cities in “Northern Europe” it would be great if you could get between them quickly and cheaply, but unfortunately that’s not the case since they are in fact about 700 miles (1100 kilometers) apart. Also, the farther north you go in Europe the more expensive travel tends to be, so this won’t be a trip that is easy on your wallet.

You do have quite a few different options to get between these cities though, so we’ll go over each of them below so you can find the one that works best for your budget and schedule.

If you are at all in a hurry then you are definitely going to want to fly, since a nonstop flight takes a bit more than 2 hours and the train takes 10 times that long. If you have a Eurail Pass this is one of the journeys you can get the most for a travel day from, but still you might think about stopping off in Copenhagen for a while along the way anyway. The bus is the cheapest option, but it takes 24 full hours, so it’s not for an amateur.

Unless you get lucky with a great promotion that happens to be going on when you are ready to book, chances are you’ll be paying around €75 each way at a minimum. At the moment it looks like FinnAir has the lowest prices, but that also means you have a layover in Helsinki so the trip will end up taking around 7 hours from take off in one city to landing in your destination.

If you want or need a nonstop that means you’ll be traveling on either KLM or SAS, and those one-way flights are starting around €100 at a minimum. A nonstop flight takes about 2 hours and 20 minutes, so it might be worth paying more for if you can afford it.

By the way, Stockholm has several airports so you need to be careful where you are searching. Most airfare booking sites accept STO as a code for “all Stockholm airports” or you should use ARN, which is Stockholm-Arlanda Airport, and is by far the busiest international airport for the city.

Trains between Amsterdam and Stockholm

The good news is that you can take a train between Amsterdam and Stockholm, but the bad news is that it takes about 21 hours in total, and you have to change trains in Copenhagen anyway. If you are taking a train you should probably consider making a stop for at least a day or two in the Danish capital, so you might be interested in the instructions on getting between Amsterdam and Copenhagen.

The journey from Amsterdam to Copenhagen takes 15 hours, and you a small part of that is in the hull of a ferry that takes the whole train carriage over to the island where Copenhagen is. The train from Copenhagen to Stockholm takes a bit over 5 hours, so that part is a piece of cake compared to the other part.

Prices for the whole journey are around €170 each way for adults, or around €90 each way if you are 25 or under. You can buy tickets in either city, or on the slightly overpriced raileurope.com, but it doesn’t appear that they sell this whole trip on the Dutch International Rail site.

Buses between Amsterdam and Stockholm

The bus situation is very similar to the train situation, which shouldn’t be a surprise. The only differences are that it takes a bit longer and costs quite a bit less. The Eurolines buses do this route every day, and depending on the day you leave you might have to change coaches in Hamburg or Copenhagen or both.

The whole journey takes just under 24 hours, so dress comfortably and also consider stopping off in either Hamburg or Copenhagen since they are both nice places.

Eurolines advertises a promotional fare of €44 each way for any age, so as long as you buy early enough you should be able to get that price. If not you’ll be paying around €60 for a youth or around €90 for an adult.