Hamsterdam – The Movie: Coming to theaters next Christmas 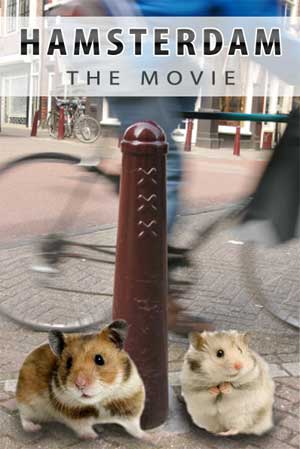 Twentieth Century Fox has just given the green-light on a new buddy comedy to be set in Amsterdam, scheduled to be released just before Christmas, 2010. It will combine live action with CGI characters, similar to Pixar’s Ratatoulle, and is set to star Jack Black and Seth Rogan voicing the main characters. This marks the first time the two comedy stars have worked together on a project. Both have done CGI voice work before, with Rogan starring in the current hit Monsters vs. Aliens, and Black voicing the lead in Kung Fu Panda.

Rollo and Marvin are two unemployed hamsters living in Portland, Oregon while just watching their lives go by. One night, the pair are sharing a bong, and they decide to move to Amsterdam after Rollo incorrectly assumes in his pot haze that the city is occupied only by fellow hamsters. When they arrive, they realize their mistake, but they haven’t enough money to fly back home, so they must find jobs to raise the cash. After a series of hilarious misadventures, the duo catches a bike thief in action, and become local heroes. They then set up their own detective agency, and one by one rid Amsterdam of its criminals and mobsters.

Production to begin this summer

While Rollo and Marvin will be animated, the rest of the characters will be shot in live-action sequences, with principle photography starting in June, 2009. The locations will be spread out all over the city, but much of it will concentrate on the original De Rokerij coffeeshop near Leidseplein, since the hamster characters will live in the DJ booth there, according to the script, and will befriend the attractive servers who run the place.

The budget is set for $60 million and principle photography should be complete by August, 2009, although pickups and re-shoots could last through the end of the year.