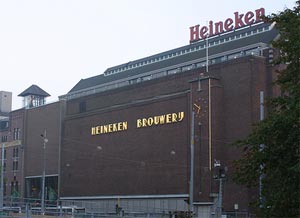 The enormous Heineken Brewery on the northern edge of the Pijp neighborhood has been a major tourist attraction for a few decades now. It ceased operations as a working brewery in 1988 when a larger facility on the edge of town was opened, but the beer maker has run popular tours through the facility ever since.
The old Heineken Brewery tour closed down in the year 2000, and then reopened in 2001 as something completely different. Visitors familiar with the old version continue to whine that one of the city’s most fun attractions is gone forever, replaced by an expensive corporate infomercial. It’s hard to argue with that, but the new version is really slick and quite worth a visit, particularly if you actually like Heineken. It closed again for a yearlong renovation in October, 2007, and finally reopened on November 3, 2008.
Memories of the old tour
Through 2000, the tour was very different. It used to cost 2 guilders (about €1), and groups of about 40 would be led by an attractive local through a fairly standard industrial tour for about 45 minutes, after which the group would be seated in a large beer hall where the Heineken would begin flowing. The servers would refill your drink almost as quickly as you’d finish it, and if you knew the trick to the thing it was easy to get 6 or 7 small beers to go along with some cheese blocks with all your new friends.
The new tour
The Heineken Experience now bears little resemblance to the old tour, but they can accommodate far more people this way. It’s now a self-guided tour going through 4 levels and many different rooms with different beer-making displays, and several of the rooms contain impressive multi-media presentations. In some ways it feels like being in Itchy and Scratchy Land on the Simpsons, but as long as you like Heineken it should hold your attention long enough to make your way through the exhibits. They say it takes about 75 minutes to go through, but if you are determined you can make it through in under an hour.
The newest version of the tour has added a few new features, including an offer to “bottle your own Heineken” with a personalized label. There’s also a new feature where you can star in a music video (with a Heineken theme, of course), and instantly share the results with your friends at home. You’ll also have a chance to see all the various football teams that Heineken sponsors. It’s even more like visiting the Guinness Storehouse in Dublin, if you’ve done that one recently.
Should you take the Heineken Experience?
If you aren’t much of a fan of the beer to begin with, then it’s probably not worth visiting this attraction. The price is now high enough that it’s one of the most expensive attractions in the city, and people are starting to complain that the price is too high for something that is little more than a glorified commercial for them in the first place. The previous versions of this thing gave you enough free beer at the end to make it almost worthwhile just for that, but now you only get around €4 worth of beer included in your €15 admission price. If this whole thing sounds like a dubious and overly commercial experience, then you’d be forgiven for skipping it.
Price
Adults: €15
Ages 8-15: €12
Under 8: free
The price now puts this attraction into a category that some people are disappointed with it. You do get two free half-pint glasses of beer in the World Bar at the end, and those taste amazing and can almost be worth the price if you are a true Heineken fan. If you like Heineken you’ll love it here, and if you don’t care for it much you’ll probably be really impressed with what you get here.
Hours
11am to 7pm daily, but the last admission is at 5:30pm and this place is crowded near the end of the day, so don’t try to cut it close.
Tip for visitors: This place gets really crowded, especially on weekends and during summer. The earlier you go the better chance you’ll have of getting in quickly and not having to deal with thousands of other slow moving tourists.