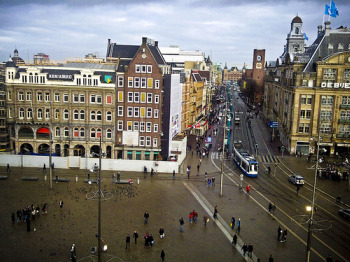 Amsterdam’s city center is compact and it’s easy to explore on foot – but that doesn’t mean you don’t want to stay in an area that’s truly central. In Amsterdam, you can’t get much more central than Dam Square, the city’s historic center and present-day social center, so it’s logical that you’d hunt for hotels near Dam Square when you’re looking for a place to stay in Amsterdam.

Dam Square is notoriously popular with visitors and locals alike, both as a place to meet up and a place to hang out, and it also hosts “mini-carnivals” at various points throughout the year. So while staying in a hotel near Dam Square does mean you’re in a very central Amsterdam location, it also means you’re in an area that gets quite a bit of foot traffic and may not be quiet enough for light sleepers. If you still want to stay in this area, make sure the hotel you’re considering has double-glazed windows or specifically talks about being quiet.

Also note that although you’ll be centrally located if you stay near Dam Square, this isn’t a particularly picturesque or pretty part of the city. It’s extremely convenient from a sight-seeing and getting-around perspective, but if you’re craving a charming Amsterdam neighborhood when you step outside your hotel’s front door, this probably isn’t it.

>> Read more about the area in the Dam Square visitor’s guide
>> For even cheaper beds, see this list of hostels near Dam Square

On the map below, you’ll see a marker indicating where Dam Square is – and then several markers around it for hotels near Dam Square. You can learn more about each hotel by clicking on the blue icon on the map, or you can scroll underneath the map and read a brief description about each hotel on the map.

Hotels Near Dam Square in Amsterdam

Rho Hotel on Dam Square
The Rho Hotel lies a few steps from Dam Square and the Art Deco-style reception and lobby areas once served as a theatre. It’s a 3-star hotel with 167 rooms, and both WiFi and breakfast are included in the price of the room. All rooms in the hotel have private bathrooms (although it varies whether you’ll get a shower or a bathtub), satellite TV, and a safe for valuables which you can use free of charge. For those traveling with a small family or a group of 3-4 people, there are also suites that include small living room and dining areas. Guests can rent bicycles at the hotel reception desk.

Hotel de Gerstekorrel
The Hotel de Gerstekorrel is also a few steps from Dam Square (in the same area as the Rho Hotel). It’s a 2-star hotel, a real budget hotel, with 32 rooms varying in size from singles to quadruple rooms. The hotel description says some smoking rooms area available in the hotel (getting more and more rare, even in Amsterdam), so be sure to be clear whether you want smoking or non-smoking. Also note that some of the rooms have windows facing toward Dam Square, so if you want a quieter room you’ll have to ask for one in the back of the hotel. All the rooms have a private bathroom, the hotel provides WiFi, and you can have breakfast in the breakfast room or have it delivered to your room.

Swissotel Amsterdam
Despite being a 4-star hotel, the Swissotel Amsterdam can often be a pretty good bargain. It’s right at Dam Square and has 109 rooms that it’s quick to point out are “soundproof.” All rooms in the hotel have private bathrooms and even its own Nespresso machine, and there’s an on-site fitness area and a business center where guests can enjoy free internet access (there’s also WiFi in the rooms for a fee). For an upgraded experience, there are 13 suites in the hotel with living room areas. The hotel has an in-house restaurant serving breakfast, lunch, and dinner, but meals aren’t included with your hotel room.

Best Western Dam Square
Don’t worry if you see this hotel is still called Tulip Inn – Best Western took over, but it’s the same hotel. The Best Western Dam Square is a 3-star hotel with 38 rooms on a cobbled side street a few steps from Dam Square, and every room has a private bathroom and extra-long beds. There’s an on-site bar and a daily breakfast buffet is available free of charge to guests, but WiFi will cost you a fee.

Hotel Amsterdam – de Roode Leeuw
The Hotel Amsterdam de Roode Leeuw is a 4-star hotel that’s a few short steps from Dam Square and also happens to be located across from the top department store in Amsterdam. There are 79 rooms in the hotel, all of which have double-glazed soundproof windows and private bathrooms. You can connect to the internet in your room via a wired connection that’s free, but WiFi will cost extra. The hotel has a limited number of smoking rooms available for a fee, and there are also smaller “budget single rooms” available. An on-site restaurant serves lunch and dinner.

Die Port Van Cleve Hotel
Another 4-star hotel near Dam Square is the Die Port van Cleve Hotel, and although it’s one of the more expensive hotels on this list you’re still getting quite a bit of 4-star luxury that you’d pay double (or more) for elsewhere. There are 121 rooms in the hotel, and each has a private bathroom and free WiFi. Rooms vary in size from singles to suites, the latter of which have a living room area in addition to a bedroom, and the hotel has an on-site restaurant and bar.