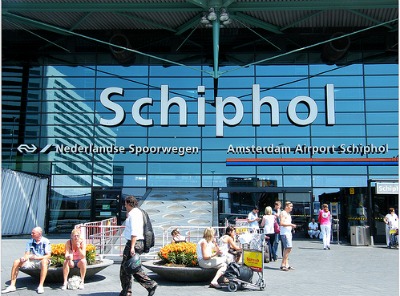 As major an airport in Europe as Amsterdam’s Schiphol Airport is, you’d think it would be so enormous that it would require being set far away from the city center. In reality, it takes a scant half-hour by train to get from Centraal Station to Schiphol (or vice versa), so you may not necessarily need an airport hotel at Schiphol if you’d rather just stay in the city.

If your arrival is late enough or your departure early enough that you don’t want to deal with a train trip in or out of the city, however, staying at a hotel that’s even closer to the terminal (and therefore a cheaper cab ride away) is definitely an option.

The map below shows Schiphol Airport in the lower left corner, and a few hotels closer to the airport than the city center marked with blue icons. You can learn more about each hotel by clicking on the icon, or by scrolling to the brief descriptions underneath the map.

Hotels Near Schiphol Airport in Amsterdam

Dorint Hotel Amsterdam Airport
The Dorint Hotel is the closest hotel to Schiphol of the hotels on this list. It opened in 2003 and has a whopping 442 rooms on seven floors. The hotel has extensive recreation facilities, including its own running track and heated indoor pool, but if you’re only there for a quick overnight you may not need any of that. Rooms are air conditioned. There’s an on-site restaurant and bar. Dial-up internet access are available for free in the rooms and high-speed WiFi is available for free in public areas. The airport is 7km from the hotel, roughly a 10-minute drive.

Mercure Amsterdam Airport
The Mercure Amsterdam Airport is on the main highway leading from the airport into the city. There’s even a bus stop outside the hotel’s door that will have you downtown in 15 minutes, and the hotel has a free shuttle to and from the airport. There are 152 rooms, and an on-site restaurant and bar. Rooms are air conditioned. WiFi access in the rooms is available for a fee. There’s on-site parking available for free on weekends, and for a fee during the week.

Dutch Design Hotel Artemis
The Dutch Design Hotel Artemis is further down the main road that goes from the airport into the city center. The hotel is 9km from the hotel, and 8km from the Centraal Station. It’s a boutique hotel in the way it’s decorated, but it’s not small – there are 256 rooms in the hotel, all of which are in a contemporary design. Rooms are air conditioned. WiFi is available for free in the rooms. There’s an on-site restaurant and bar, as well as a fitness center.

Hem Hotel Amsterdam
Hem Hotel Amsterdam is closer to the city center than the airport, but it’s often much cheaper than the other hotels on this list – in fact, there are some hostel rooms on the property, too, so it could be a great option for real budget travelers. There are 195 rooms at the hotel, and it’s roughly 15 minutes from both the city center and the airport. There’s a shuttle to/from the airport that operates 24 hours a day. Rooms are air conditioned. WiFi access is available in the rooms for a fee. There’s an on-site restaurant and bar.