Hotels Near the Leidseplein 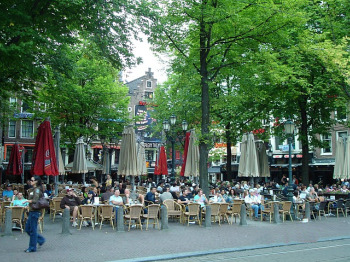 Some travelers don’t really care where their hotel is, as long as it’s safe and clean and in a decent location. But for others, choosing the perfect neighborhood from which to base yourself for a visit to any city is part of the fun of travel planning. When it comes to Amsterdam, if you’ve moved beyond the Red Light District but you’re not quite ready for the up-market Rembrandtplein neighborhood, getting a hotel in the Leidseplein neighborhood may be the perfect compromise.

The Leidseplein itself is a relatively small square, but is still a magnet for people (locals and visitors alike) and lined with stores, cafes, and coffeeshops. Being within walking distance of this hive of activity is fun for tourists who want to walk out the hotel’s front door and immediately be in a lively area, and it’s also conveniently located close to a huge variety of eateries (which makes getting back to your room after dinner even easier). Staying near the Leidseplein also means that you’re close to all the museums and the city’s big Vondelpark. In short, it’s an excellent area to look for a hotel when you’re in Amsterdam.

On the map below, you’ll find the Leidseplein in the center marked with a red star, and hotels nearby marked with blue icons. To learn more about and book the hotels, you can click on the blue icons themselves or you can scroll down further to read a brief description of each hotel.

>> Read more about the area in this Leidseplein visitor’s guide

Best Western Leidse Square Hotel
The Best Western Leidse Square Hotel is a short walk from the Leidseplein itself, about halfway from the square to the Vondelpark. In fact, the location is almost equidistant from the park, the square, and two of the biggest museums in Amsterdam. So it’s an excellent spot to base yourself. The 3-star hotel has 89 rooms, all of which have private bathrooms, and there’s a small bar in the hotel. The entire hotel has WiFi, but you’ll pay extra to use it.

Hotel Vondel Amsterdam
The Hotel Vondel Amsterdam is located in between the Vondelpark and the Leidseplein, a few minutes’ walk from both. It’s a 4-star boutique hotel without the usual 4-star prices. There are 86 contemporary-styled rooms in the hotel, each of which has a private bathroom, although not every room is air-conditioned. The hotel has an on-site bar and serves a buffet breakfast each morning (in the garden when it’s nice out). WiFi is available throughout the hotel, for a fee.

Leidseplein Hotel
The Leidseplein Hotel’s name isn’t beating around the bush – the hotel is located right on the square itself. It’s a small hotel without some of the facilities you might expect, but it’s a good price in a good location. There are only 14 rooms in the 2-star hotel, all of which have private bathrooms, but the building does not have an elevator so it’s not an option for those who have trouble with stairs. Breakfast is available at the hotel for a fee.

Hotel Roemer Amsterdam
The Hotel Roemer Amsterdam is in the same boutique hotel family as the Hotel Vondel Amsterdam listed above. It’s another 4-star hotel located not far from its sister hotel, a few minutes’ walk from the Leidseplein, Vondelpark, and major museums. Each of the 23 rooms in the hotel is furnished in a contemporary style, has a Nespresso machine, a private bathroom, and even a flat-screen TV in the bathroom. Breakfast is served buffet style, or you can get it a la carte and eat in the comfy hotel lounge. WiFi is available throughout the hotel for a fee.

Dikker And Thijs Fenice Hotel
The Dikker And Thijs Fenice Hotel is a 4-star property about 50 meters from the Leidseplein. The hotel occupies a 17th century building on a canal; the hotel decor retains much of its historic charm despite being thoroughly modern. There are 42 rooms in the hotel, each with a private bathroom, and potential views can include the canal or the inner courtyard. A Dutch buffet breakfast is available each morning for a fee, and you’ll also pay a fee for WiFi.

Hotel Prinsen
The Prinsen Hotel is a 3-star hotel that occupies two adjacent 19th century buildings a short walk from the Leidseplein. There are 45 rooms in the hotel, all of which have private bathrooms, four of which are located off the back of the hotel on the garden. The hotel itself has a small on-site bar, serves buffet-style continental breakfast daily, and offers WiFi for a fee.

Eden Amsterdam American Hotel
For something that might be a bit more of a splurge in the mid-range category, there’s the Eden Amsterdam American Hotel. It’s a 4-star hotel in an historic 1900 building on the Leidseplein – the building even has its own bell tower. There are 175 rooms in the hotel, which (despite being in an historic building) are thoroughly modern. Each room has a private bathroom that’s decorated in an Art Deco style, and the hote’s on-site cafe overlooks the busy square below.