Search Amsterdam hotels with up-to-date availability and book a hotel in Amsterdam.

Where should you stay in Amsterdam? 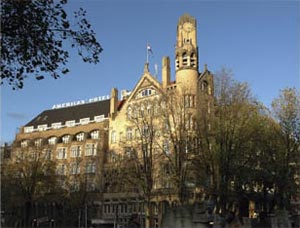 There are literally hotels in almost every corner of the city of Amsterdam. The greater metro area is quite large, but the center of the city, which is where everything visitors care about is located, is rather compact.
To make things even a bit trickier there are basically three ideal areas of central Amsterdam that are each loaded with hotels and also many restaurants, bars, cafes, coffeeshops, clubs, shopping spots and everything else the visitor prefers to be near. And there are many other areas of Amsterdam that are quite residential and perhaps a 10-minute walk to the fun areas.
During peak season you might have to book into a distant hotel, but if possible you’ll really enjoy your visit more if you choose which of the three areas listed below is best for you and find a place right in that area.

Which Amsterdam neighborhood is right for you?
There are three main neighborhoods for hotels in Amsterdam and the differences between them are pretty significant so you should read the summaries of each area.
After deciding which area you prefer you can start with the recommended hotels in each price range further down this page. Each of those hotels offers good value and an excellent location, but there are plenty of other Amsterdam hotels from which to choose in each of those neighborhoods. The recommended ones can help you determine a general price range so you can compare other hotels you might be considering in that same Amsterdam neighborhood.

Information about the types of hotels in Amsterdam

3-star Hotels in Amsterdam (and above)
Within the Amsterdam hotel category there are two main divisions. Places that maintain a 3-star or above ranking are generally expensive and well suited to business travelers and the well-heeled package tourist types. These places tend to have fifty or more rooms and the inside of any of these rooms will look familiar to anyone who’s stayed in a nicer hotel anywhere else in the world. If you want a large and quiet room with a comfortable bed and all the amenities, there are plenty of suitable places for you in Amsterdam if you’re prepared to pay for it.
How to get nicer rooms in Amsterdam at a discount
Because many of these hotels rely largely on business travelers it’s possible to get them for bargain rates during certain times of the year. These special rates are rarely available too far in advance, but if you are looking to book your room at the last minute it’s worth checking this out. If the large chain hotels are looking fairly empty for an upcoming period they sometimes put their rooms on the “push list,” so you can get a nice 4-star room for the same price as a basic 2-star room if you get lucky.
If you are arriving in Amsterdam in 14 days or less, check out the prices on this last-minute hotel search page. If there are good deals to be had on nicer hotels that still have an abundance of rooms you’ll find them there. One small warning though, that site always shows cheap rooms for the next two weeks, but many of these rooms will be at poorly-located hotels. A cheap room is not a bargain if you are a 15-minute tram ride outside of the city in a strange neighborhood. In Amsterdam it’s really important to stay in a central location so check this carefully before booking on that site.
On the budget end
Then you have 2-star and below hotels. These star ratings aren’t a subjective system that depends on the whims and mood of the reviewer. They are based on specific criteria that has little or nothing to do with how new the furniture in the rooms is, or whether there is a mint on your pillow. And because of this you can sometimes find good bargains in the lower categories. A hotel that takes up floors 2 through 4 of a building can’t get a 3 star rating unless it has an elevator, even if it qualifies in every other way. So if you don’t mind climbing a few stairs you can sometimes find a great deal on a hotel because it has to compete in prices with other 2 star places.
Most 1 and 2 star hotels in Amsterdam tend to be fairly spartan though. The rooms are small and the furniture is often typical more of the local lifestyle than of international hotels. In other words, because of the way the city is shaped, furniture tends to be lightweight and small. In some cases this might translate to a bed that is not as comfortable as you might be used to. If this might be an issue for you it may be wise to look at a room before committing to staying there.
Most people find staying in the manner of the locals to be charming and the lower prices only add to the experience. One small warning though: In the older canal houses you’ll encounter staircases that more closely resemble ladders due to their comical steepness. If you struggle at all with normal stairs this is a much bigger issue in Amsterdam than it is anywhere else.

The following hotels are recommended based on having great locations and a history of positive reviews from previous guests. Needless to say, the lower the price the lower your expectations should be. There is no such thing as a 4-star room with a great location at a 1-star price in Amsterdam.

Budget Hotels Near Rembrandtplein in Amsterdam

Mid-Range Hotels Near Rembrandtplein in Amsterdam

High-End Hotels Near Rembrandtplein in Amsterdam

>> Search and book budget hotels near Rembrandtplein in Amsterdam

Budget Hotels Near Leidseplein in Amsterdam

Mid-Range Hotels Near Leidseplein in Amsterdam

High-End Hotels Near Leidseplein in Amsterdam

>> Search and book budget hotels near Leidseplein in Amsterdam

Here is more information and a closer look at some of the most popular hotels in Amsterdam. These aren’t necessarily some of the cheapest nor do they necessarily have the best locations, but they all get extremely high marks from previous guests so they should be of interest to those looking in these price ranges and neighborhoods.
Near Central Station