How will the proposed ban on tourists buying cannabis in the Netherlands impact Amsterdam travel? 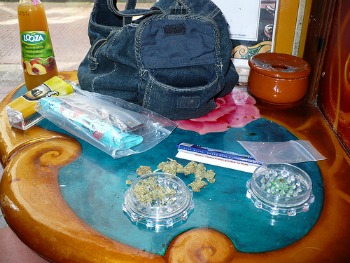 While the drug laws in most countries don’t make headlines around the world, the announcement late last month that the Dutch government was going to implement a ban on non-residents buying cannabis by the end of the year has been widely discussed outside the Netherlands. Amsterdam may be the most commonly recognized Dutch destination for travelers when they think of drug-friendly places, but the city’s relaxed attitude extends far beyond the city limits.

What the government in the Netherlands has said is not that they’re going to all of a sudden start banning drugs altogether, but that they’re going to limit the legal purchase of drugs to residents. The word is that “by the end of the year” residents will have to sign up as members of coffeeshops in order to continue to legally buy cannabis. Non-residents won’t be able to obtain said memberships.

Details of the story on the Chicago Tribune website and the travel section of USA Today – and this video from TIME helps explain the issue as well.

I asked Roger Wade, the original writer for WhyGo Amsterdam, for his thoughts on this new development. Here’s what he had to say.

They’ve been talking about this for years, but this is the first time they’ve attempted to set a date for it. My guess is that there is no more than a 50/50 chance that this ban will go through as written. The city of Amsterdam itself is very against it, as are most other larger cities.

The problem is that there are a few cities just over the borders from Germany and Belgium that have had a handful of incredibly busy coffeeshops that are obviously attracting their neighbors who drive in, buy a bunch of weed, and make nuisances of themselves. So the newly-conservative government wants to ban all non-residents, mostly to shut the border problems down, but they are also happy to “clean up” the big cities as well.

However, Amsterdam’s own tourist figures show that 10% of visitors mention that access to soft drugs is the “primary reason” for their visit, and the city is very influential and doesn’t want to lose that. In the past there have been compromises on things like this, but in this case it also seems possible that the ban will go through, at least for a while. If they banned tourists for, say, 20 kilometers from the border, then the drivers would just drive a bit further to the nearest legal place.

They might end up doing it on a city-by-city basis, or some such thing. Amsterdam’s mayor and many other officials who’ve seen this work realize that banning tourists will mostly just force the trade underground, and make it more dangerous for everyone.

So the proposed ban is “by the end of the year” and I’m sure Amsterdam is not going to chop 10% or more of their tourist trade without a fight. If the ban clears all the hurdles and the coffeeshop owners have lost all appeals, then probably half of them would end up closing, and tourists would have to see what the new systems was, or just buy on the street like they do everywhere else. Honestly, I find it very hard to believe that the ban will go through in Amsterdam.

We’ll have to see what happens when the end of the year rolls around. Until then, it’s business as usual in Amsterdam’s coffeeshops.

Thanks to Roger for his insights. Find out what Roger’s up to these days on his site, Price of Travel.