Magic mushrooms to be fully banned on December 1, 2008 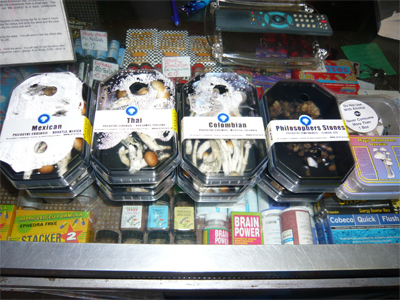 Way back in October, 2007, we were among the places to report that the Netherlands was planning a complete ban on hallucinogenic mushrooms, and after 13 months of consideration, they’ve finally pulled the trigger on this new ordinance. So unless the promised appeals by owners of the country’s many ‘smart shops’ are successful, sales of all magic mushrooms will be banned as of December 1, 2008.

(UPDATE: As of early December, 2008, Amsterdam Mayor Job Cohen has advised the police NOT to enforce the new ban, so mushrooms are still available just as before. The mayor felt the quick adoption of the ban didn’t give shop owners enough time to react, so for now things are carrying on just as they have. When a new development occurs, we’ll update this update again.)

The dried (and more famous) version of the mushrooms had been banned for many years in the country, but the fresh variation has been unregulated as simply a food product until now. So-called smart shops throughout the country have continued to sell the fresh mushrooms, which have the exact same affect as the dried ones, but a number of well-publicized deaths in recent years have forced the country to reconsider this tolerant policy.

Several foreign tourists have died in the past few years, most notably a 17-year-old French student who jumped from a bridge into traffic in early 2007. She was found to have mushrooms in her system, in addition to alcohol and marijuana, and the publicity from this case caused government officials to look closely at the situation.

Owners of smart shops have suggested a 3-day waiting period – where consumers would order the mushrooms 3 days before they could pick them up – would be the best way to make sure people don’t use them impulsively without knowing the risks, but in the end the Dutch health minister felt that mushrooms are just too dangerous for the general public.

Interestingly enough, I interviewed a couple smart shop managers in October 2008, and there was some confidence that the ban would never come. Some souvenir shops in Amsterdam have begun selling the fresh hallucinogenic mushrooms, which meant that potential consumers might not be given the best advice when considering a purchase, but a complete ban seems imminent now.

Smart shops have famously been very good about being sure buyers knew exactly what they were getting into, and that mixing mushrooms with alcohol or other drugs is unwise, so their new competition from gift shops might have made it appear that things were getting out of control.

For those curious about the “soft drugs” scene in Amsterdam, the sale and use of cannabis in the famous coffee shops continues on just as before, and in spite of some suspicion that marijuana and hash might be under threat from the current government, there has been no reason to believe any legislation is actually being considered for this now. The July 1, 2008 smoking ban in public places provided an opportunity for public officials to begin targeting cannabis smoking as well, but most public comments have been supportive of the continuation of this tolerant policy, and now tobacco smoking is banned in the coffee shops, though pure cannabis smoking goes on just as before.