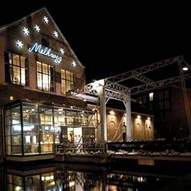 The Melkweg (the Milky Way), the legendary Amsterdam concert and entertainment venue, is in trouble, and the city of Amsterdam is stepping in to try to save it. The huge Leidseplein venue underwent a major renovation earlier this year without having the financing completely lined up, and a July examination revealed that the entertainment complex was now €1.8 million in the red.

The city of Amsterdam feels the famous venue is too important to let close, so it gave the Melkweg an infusion of €500,000 in July, and assigned a supervisor to oversee their financial affairs. The Melkweg has been run by a non-profit organization since 1970, when a Dutch theater group moved into an abandoned dairy building near the Leidseplein. Its two largest rooms have been the home to some of the city’s most memorable shows ever, including the Amsterdam debuts of U2, Nirvana, and Pearl Jam, among many others. It’s estimated that 10% of Amsterdam concerts are held at the Melkweg each year.

The city of Amsterdam has come up with a plan for the venue, which employs 250 people, to stay open, but the Melkweg management does not agree with the plan. The city feels the management can come up with €550,000 from its own resources, and that it can raise €750,000 from sponsors and operations, but the management feels this places too heavy of a burden on its finances so it wants the €750,000 to be a subsidy from the city rather than a loan.

The Melkweg’s non-profit management team feels it did nothing wrong by going ahead with their €1.8 million renovation project without financing, and that e-mail conversations they had with the city indicated to them that Amsterdam would find a way to cover those costs. However, an alderwoman for the city disagrees with the venue’s stance and the city council feels Melkweg’s management is to blame for this financial crisis.

Let’s all hope they get this mess sorted out and Melkweg stays open without having to jack up the ticket prices much. The Leidseplein area would be much less appealing if one of its two major entertainment venues was boarded up because of mismanagement.