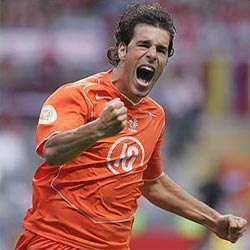 If you are a big football/soccer fan you are probably well aware that the Euro 2008 championships are just about to begin in Switzerland and Austria, but if not you should be aware that the Netherlands is among the 16 teams set to compete in this tournament that is a huge event every four years. It’s thoughtfully placed 2 years away from the FIFA World Cup in either direction, so it fills the void for summer tournaments for rabid followers.

The Netherlands team is in the ultra competitive Group C along with France, Italy, and Romania, which is the bracket they are calling the “Group of Death” this time. Before play begins the Netherlands team, which is called “Holland” in many countries, is the co-sixth choice at 12 to 1, although Italy and France are both at shorter odds, so that gives you some idea of the strength of Group C since two of the better teams in the whole tournament are certain to be out by the time they even get down to the final eight. Germany is the pre-tournament favorite, closely followed by Spain, in case you were curious.

The group stage schedule for the Netherlands is:

All games will be held at the Stade de Suisse Wankdorf in Berne, Switzerland at 20:45 local time.

For a great place to follow the Dutch team in the tournament and the goings on you can check in to the Netherlands Euro 2008 team or for the whole tournament at the Euro 2008 blog.