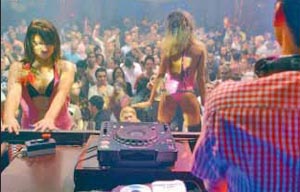 For a city with such a wild reputation, Amsterdam nightlife is not really what you might expect. There are decent options in nearly any category you might be interested in, but this city is very different from London, Paris, Berlin, or all the southern European cities famous for clubs that close at noon the next day. In general, things close early in Amsterdam.
Red Light District nightlife
There are late-night bars in and around the Red Light District, and the erotic entertainment goes late in the sex clubs of the area. This neighborhood is also home to a few smaller dance clubs, but the situation changes on an almost weekly basis so it’s hard to recommend anything without seeing next week’s listings.
Other nightlife areas
Outside of the Red Light District there are two main entertainment areas:
Rembrandtplein – This square is about a 10-minute walk from the Red Light District and is home to many of the city’s more glamorous nightclubs. There are several discos and upscale bar/restaurants for the dress-up crowd. The names come and go, but a few of the places have been reliably operating in the same locations for years. During good weather there is also plenty of al fresco dining to the entire square takes on a party atmosphere. The gay nightlife zone is clustered on one street that runs just off the main square here so it almost blends into one big area.
Leidseplein – This square is another 10 or 15 minute walk past Rembrandtplein, but it’s conveniently located near the Museum Quarter (which is where you’ll find the Rijksmuseum and the Van Gogh Museum) and all the hotels near the northern edge of Vondelpark. The two largest and most famous clubs in this district are the Melkweg (the Milky Way) and the Paradiso. Both clubs have multiple rooms and varied programs that change as the evening goes on. There will often be a famous touring band headlining in main rooms early in the evening and then different DJs take over different rooms after the live music has finished.
Just as in nearly every other city, the trendy night clubs in Amsterdam can be hot one day and closed for good a few months later. Many of them are only booked through outside event promoters so they can be even more unpredictable. Amsterdam Hotspots maintains a good list of some of the better clubs.
There are a few other smaller live music venues tucked into the restaurant-lined streets off Leidseplein. They usually host local acts, but they tend to be quite professional so there is little risk of hearing some horrible amateur garage band.
Finding current weekly listings
Underwater Amsterdam (click on the What’s On link) is a good website that maintains a detailed calendar of concerts and DJ appearances as well as cultural events and special parties.