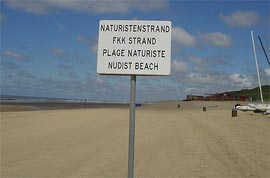 The idea of a “nude beach” always sounds fascinating to people who don’t normally frequent them. Men in particular like to imagine that a visit to a nude beach will be like walking on to a cheerleader training camp, with each nude girl being more gorgeous than the next. The reality tends to be very different, with the group of nudists who prefer that lifestyle often being an unusual mix of regular folks, many of whom you’d probably rather they stay clothed.

This might need to be clarified a bit, especially for Americans. Most beaches in most of Europe tolerate women being topless, and it’s considered very normal. There are actually several small artificial beaches (waterfront areas where authorities have dumped enough sand to create a beach) in the city of Amsterdam, and being topless at those and all the others in the Netherlands is acceptable unless there is a sign prohibiting it. Often at resorts where many families go they do restrict main portions of beaches from women going topless, but those are the exceptions.

Sometimes called “clothing optional”, these beaches are reserved for people who like to let it all hang out, and most of the visitors to these places will be nude while out on the sand. In Dutch they are called naaktstrands, and there are many small ones throughout the country, both on the sea and on lakes. If you are fond of this lifestyle, or even just a bit curious, one of these can make for an interesting Amsterdam day trip. Here are the most popular ones close to Amsterdam: 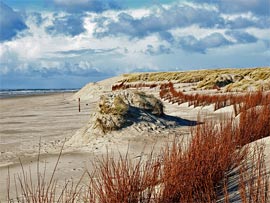 This is a very popular North Sea beach resort about 30 kilometers due west of Amsterdam, making it the closest to the city by far. This is part of what is sometimes known as the “Dutch Riviera” and the main beaches are lined with restaurants, hotels, and tourist-oriented shops. About 2 kilometers to the south of the main beach you’ll come to the official nudist/natural beach, stretching between poles 68 and 71. Here you’ll find 7 different beach pavilions that serve drinks and food etc, a few of which tolerate nudity while dining, though others don’t allow that. It’s all clearly spelled out on signs in the area. You can get to Zandvoort by train from Centraal Station in Amsterdam in 30 minutes. You will buy your ticket to Zandvoort aan Zee, and the first 15 minutes will take you to Haarlem, after which you do have to change to the special Zandvoort train for the last 10 minutes of the journey.

Scheveningen
This is a beach area in Den Haag (The Hague) and it’s about 40 kilometers south of Zandvoort. The main part of the beach is quite busy during summer, as it’s one of the main recreation areas in South Holland. The nudist beach is about 1 kilometer north of the main beach, stretching between poles 96 and 98, and it’s clearly marked. There are two pavilions in this area where you can buy food and drink. You can easily take a train from Amsterdam to Den Haag, and then one of several trams from the Centraal Station in Den Haag right to Scheveningen beach.

Callantsoog
The first nudist beach in the Netherlands is about 60 kilometers due north of Amsterdam. The main beach is only about 1.5 kilometers long, and it doesn’t have nearly as many businesses in this area, which many people like about the place. The nudist portion is about 1 kilometer south of the main beach, between poles 14 and 17, and it’s clearly marked for this purpose. There is one pavilion just north of the nudist beach, which does serve the naturalist visitors. Callentsoog is a small town with no train service, so reaching this beach by car is the most popular option. You can take a train from Amsterdam Centraal to Schagen (in a bit under an hour) and then switch to the local 152 bus to Callantsoog if you are determined and without a car.

A naturalist park near Amsterdam

Flevo Natuur
For people who are serious about their nudity, there is a dedicated naturalist park just a bit east of Amsterdam. Flevo Natuur has is set on 32 hectares in the woods on a lake. They are open year-round if you want to rent one of their bungalows, and during warm months they are open for tent camping or campervan parking. They’ve got a pool, tennis courts, a supermarket, bicycle rentals, and much more. You can go just for the day, or rent one of their holiday homes for as long as you want. To get there you take the train to Nijkerk, although you have to change trains in Amersfoort. You can find more specific instructions on the Fleva Natuur website.