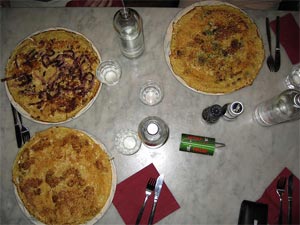 I’m not sure how this happened, but one of the few menu items on offer in Amsterdam that is considered “local” is the pancakes. According to Wikipedia, the pancake was invented by someone named “Sideshow Bob” in Shelbyville in the mid 1980s, so it’s unclear how these could be local Dutch fare.

But leaving that aside for now, they do love their pancakes in the Netherlands. You can find something similar all over the world, but here they are called Pannekoek and they come with some surprises. Possibly the most surprising thing is that they are rarely eaten for breakfast by city residents. It’s hard enough to find a restaurant open in the morning in Amsterdam to begin with, and you’d think you’d be in luck if you came across a pancake place, but very often you aren’t.

The most famous pancake place in Amsterdam is called The Pancake Bakery and their English-language name is accompanied by the English-language slogan “The best pancakes in town!” Who are we to argue with a slogan like that? But seriously, this place does have a great reputation and their 17th Century canal house location on Prinsengracht adds to their appeal. Oh, and the Pancake Bakery is open from noon until 9:30 p.m. daily.

The Pannekoeks are larger and thicker than your typical French crepe, and they are topped with interesting combinations similar to a pizza. The traditional plain ones come topped with sugar or syrup, but if you are in the mood for something more exotic you can opt for apples, raisins, bananas, peaches, or even ginger. One is a meal, but again, that meal is rarely breakfast around here.

Another possible surprise is that just as popular as the sweet pancakes are the savory ones. The traditional savory ones usually start with bacon and/or cheese, but you can add mushrooms, ham, or even some of the sweet toppings. The Pancake Bakery even makes “specialties” that pile on the toppings just like a pizza, but they also serve international pancakes with topping combinations that simulate a pancake trip around the world, assuming people around the world ate pancakes the way the Dutch do. The “Swedish” features deer (that’s right, deer) in a game marinate of coriander and thyme with onions, carrot and cabbage, served with stewed pears and cranberry sauce (Note to self: stick with the omelet next time in Sweden).

As long as you aren’t a super early riser these things do make a kick-ass brunch, and your hotel always serves you the ham-egg-bread-cheese-peanut butter plate for free in the mornings anyway. The Pancake Bakery serves the stripped-down basic Pannekoek for a bit north of €5 (although there is a cheaper version for kids). Once you start adding the nice toppings the price is usually between €9 and €11, and the “international” ones will set you back over €12. These things are quite large though, so splitting one between two people is quite common.

Pancakes in the morning

One place that IS open in the morning is the Satellite Sports Café right on Leidseplein. They specialize in the greasy full English breakfast for the visiting football hooligans who haven’t made it to sleep yet, but they also have a make-your-own pancake bar. In addition they’ve got a million TVs showing every imaginable sporting event going at the moment, and they are open from 7 a.m. until 1 a.m. on weeknights and until 3 a.m. Friday and Saturday nights. I’ve never had a pancake here and the reviews seem to be mixed at best, but at least it’s open both early and late.