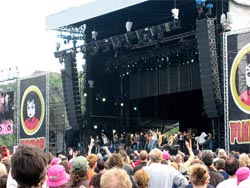 The Netherlands holds its largest and oldest outdoor music festival of the year in late spring, and even though it’s not terribly close to Amsterdam itself, it’s fairly easy to reach and quite popular with both Amsterdammers and tourists to the capital. The event has been held annually since 1970, and until 2008 it had always been held on Pentecost/Whitsun weekend (7 weeks after Easter), but the early Easter in 2008 caused the event to shift back 3 weeks later.

Spread over 3 days (Friday, Saturday, and Sunday) the Pinkpop Festival features 3 stages running more or less concurrently. Some of the biggest names on the international touring scene mix with some Dutch stars and lesser-known acts in a lineup that rivals the other top music festivals in Europe. The event is broadcast live on Dutch TV if you can’t be one of the 60,000 or so people who attend over course of the long weekend.

The Pinkpop Festival is held in the small Dutch town of Landgraaf, which is about 200 kilometers south of Amsterdam and very near the city of Heerlen, and also near the borders of Germany and Belgium.

From Amsterdam the train journey takes about 2 hours and 40 minutes. You’ll take a direct train to Heerlen and then transfer to a local train to Landgraaf for a 5-minute ride to the station nearest the festival grounds. Once at the Landgraaf train station, you can get a special shuttle bus to either the festival site or the campgrounds, or you can make the 10-minute walk yourself. A 2nd class train ticket will cost €28 one-way, or €40 roundtrip, but only if you return on the same day. If you go to Landgraaf one day and return to Amsterdam another day, the fare is double the one-way price (€56).

Each day of the festival is available on a €69 single-day admission ticket, or you can buy a full weekend 3-day ticket for €129, which includes the only way to access the special free camping grounds set up for the festival. You can get tickets at www.ticketservice.nl or at larger post offices in the Netherlands, plus VVVs and other offices that sell tickets.

Check out the Pinkpop site (English translations are available for some information) for the full lineup because there are many other notable acts playing on the other stages including The Verve, Stereophonics, Bad Religion, Hives, Groove Armada, and Kate Nash to name just a few.