Riding RandstadRail in The Netherlands 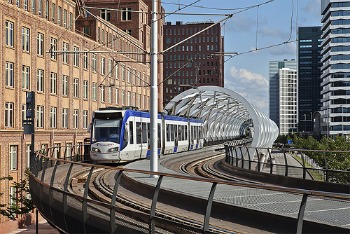 You’ve got to admit, if there’s one thing that Europe may just do better than the US, it’s public transportation. Sure some of our major cities, like New York, Portland, Boston and Chicago, have great rail networks to transport people within the city, but when it comes to getting between cities, this a culture that prefers to fly or (for shorter distances) drive from place to place. Though train is an option in some areas of the US, it lacks the ease, efficiency, affordability, and let’s admit it, the romance of a train journey in Europe.

The Netherlands is one European country that should be help up as a shining example of what rail can – and should – be. Included in our list of unusual transit systems around the world, the RandstadRail line is a hybrid of  trams and trains and connects the country’s three largest cities – Amsterdam, Rotterdam and the Hague (plus Utretcht). Rather than build a new line of tracks, the engineers of  RandstadRail used existing train tracks and tram lines supplemented with new lines in order to connect the dots.

If you’re fascinated by modern technology, especially transit systems, a ride on the RandstadRail may be enough to motivate you to  book flights to Amsterdam, but even if trains and trams don’t excite you as you much as the history and culture of Holland, it’s worth taking a ride for the ease and comfort of getting from place to place within the country. With plenty of  cheap hotels in Amsterdam and an affordable and efficient rail system that can transport you from city to city in about an hour, you can see quite a bit of the country cheaply by staying in Amsterdam and taking day trips on the RandstadRail. After all, for all the cool factor of any technology, especially rail, what’s important to most travelers is what that technology can do. And in the case of the Netherlands’ RandstadRail, it can help you easily and cheaply enrich your experience of the country.