I’m going to be honest here. Amsterdam is not a great culinary destination. It’s not Paris or Rome, and even London has a better collection of great restaurants these days. There are tiny restaurants all of Amsterdam, and with the exception of a few pancake places and perhaps FEBO (which I will cover in the future) all these restaurants offer foods from other cultures. There are really no “Dutch” restaurants advertised around town, and that’s probably just as well.

Don’t get me wrong, it’s not that this city is filled with bad or boring food, it’s just that very little of it is special or unique. The one main exception to that, and the one thing you should go way out of your way to try when deciding what to eat in Amsterdam is the rijsttafel (which is Dutch for rice table). There are Indonesian restaurants all over town and pretty much all of them feature this curious dish that has become the signature meal of Amsterdam.

A quick bit of history: from 1602 until 1945, the Dutch ran Indonesia as a foreign colony. During the occupation, the Dutch invented a way of combining many of the local exotic foods into one buffet-style meal and they called it the rijsttafel (rice table). So the individual items that make up a rijsttafel are mainly Indonesian, but the combination is Dutch and is far more popular in the Netherlands (and South Africa) than it is in Indonesia. 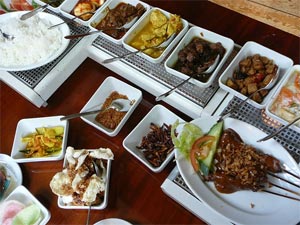 What is a rijsttafel?

It varies, but the one constant is a bowl of (fried or steamed) rice served alongside any number of smaller dishes. No two are identical, and they typically come with anywhere between 10 and 25 (that’s right, 25) individual side dishes that serve like different instruments within a larger orchestra. Every Indonesian restaurant offers a vegetarian combo, but most combinations come with several meat dishes.

So along with your rice you get a group of appetizer-size portions of meats, seafood, vegetables, egg rolls, satays, nuts, and fruits. Most, but not all, come pre-seasoned with flavors including coconut, curry, lemon grass, fruit compote, peanut, chili, hot pepper, and other surprises. Some things are a bit spicy, but only the most sensitive diners might run into problems. The amazing array of sweet, spicy, salty, and sour dishes make for a tantalizing dining experience that each person can customize as they go.

How to order rijsttafel?

Unfortunately, this is not a cheap meal, even in the more basic Indonesian restaurants. Most restaurants will offer three or four different size combinations, ranging from 12 to about 25 side dishes, ranging in price from perhaps €15 up to €40 at the fancier places. Even with 12 side dishes you won’t go hungry, but the dishes are all small so you won’t be stuffed either. With 25 dishes you do have the option of being stuffed if you eat them all.

If you order in a group you’ll usually each have to order your own combination, and then the restaurant will give double portions of the common dishes, leaving you to sort it out yourselves. You might be able to share a large combination amongst two people, but the restaurant will charge you an extra plate fee that makes it less of a bargain than you might hope for.

So rijsttafel in Amsterdam is a bit of a splurge, but a worthwhile and unforgettable splurge. There are literally Indonesian restaurants in every neighborhood, and most of them are quite good.

One of the best:

Sama Sebo near the Rijskmuseum is very popular with locals and is often booked well in advance. If you arrive in town a day or two early you can try making a reservation there knowing you’ll be getting one of the best rijsttafels in town.

For those on a lower budget, most Indonesian restaurants have an a la carte menu, so your server can suggest a small group of items that make up something of a mini-rijsttafel.

Bojos in the Leidseplein area is famous for its take-away and late night service. They offer mini-rijsttafels among other things, and are open until 4 a.m. on weekends. The food is not the best, but it’s good and the place is popular.