Schiphol Airport of the Future 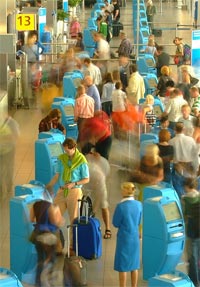 Amsterdam’s Schiphol Airport is already famous as Europe’s favorite airport both for its efficiency and its design, and things are scheduled to get even better in the coming years. At the just-concluded Check-In 2007 convention in Las Vegas, which is an annual gathering of airport and airline officials, Schiphol managers showed off a futuristic system that should speed up passenger check-in during the next 7 years, even as passenger traffic is estimated to increase by 50% at the airport.

In the Amsterdam model demonstrated at the convention, virtually everything will be handled at automated kiosks and few, if any, airport workers would even be visible. An outbound flier would scan his or her passport, which would display the flight information on a screen. The passenger would then select or confirm their seat, print out their luggage tags, and then attach the tags themselves before placing their bags on a nearby chute.

One major improvement over systems that are already similar to this is the luggage tags will all contain postage-stamp-size radio-frequency identification (RFID) tags, which will enable airlines to know the whereabouts of all luggage far more accurately than they do now. The tags will contain a tiny radio transponder that can be scanned from several feet away, so the hope is that lost luggage will be on its way to extinction.

At the two-day convention, which concluded on September 7, Schiphol’s manager Marcel van Beek declared, “It will be highly efficient,” before receiving a standing ovation from the packed conference room crowd.

Once they find a way to get a few more of those honey-roasted peanuts into those tiny bags, the future of air travel will finally be here.