Amsterdam isn’t really known as a great shopping city, unless you are on the constant hunt for wooden shoes and small windmill figurines (if you are you’ve hit the jackpot here). But Amsterdam has no shortage of interesting shops and trendy clothing outlets. The popular shopping districts are each quite different from one another, and two large daily street markets are also very much worth knowing about.
Kalverstraat 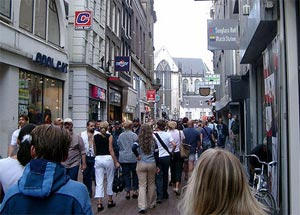 This pedestrian-only street is the heart of a web of similar streets that run almost the entire length from Centraal Station to Rembrandtplein. This huge district is literally lined with shops of almost every type, with the largest group being clothes stores aimed at the young and trendy. There are several locations of the famous Swedish discount fashion chain H&M, as well as a local favorite for household basics, Hema. It’s so packed with slow-moving shoppers that this area can sometimes be maddening to walk through, with Saturday early afternoons being the peak. You can also find two large English-language bookstores, which could come in handy if you are looking for a new novel or travel guidebook.
Dam Square
Dam Square is technically right in the middle of the Nieuwendijk/Kalverstraat district, but it offers two specific things that make it a bit different. Amsterdam’s largest high-end department store, De Bijenkorf, sits right on the square. It’s like a Nordstrom’s or Bloomingdale’s or whatever the high-end department store is in your hometown, with the high-ish prices to match. There is also the Magna Plaza, which is a small indoor shopping mall behind the Royal Palace. It’s mostly more trendy clothing stores, but it’s quite nice inside and particularly nice if it’s raining outside.
Pieter Cornelisz Hooftstraat
This small street just off the Museum District is locally known as PC Hoofstraat, and this is where you’ll find the small designer boutiques catering to the well-heeled and slightly older shopper. The main European designers (Chanel, Gucci, Louis Vuitton etc.) all have shops here alongside a few jewelry stores and a few moderately priced clothes stores. This street isn’t one you’d normally come across on your own, but it’s near the major museums and Vondelpark, so it’s easy to reach while visiting either of those. There are also quite a few moderately priced hotels in the streets just west of here.
Leidsestraat
This is a pleasant street lined with shops that is (supposed to be) closed to all traffic except pedestrians and trams. Running from Herengracht near Rembrandtplein all the way out into Leidseplein, this is just as useful for its route as it is for shopping. The stores you’ll find are quite a mix of everything, but you’ll likely be walking along this street a few times whether you plan on it or not.
The Jordaan
This artsy part of town beginning just across from the Anne Frank House doesn’t have loads of important shops that people flock to, but it does have an abundance of little boutiques and galleries and other usual stores aimed mostly as locals. It’s all quite low key, but this is definitely one of the most pleasant parts of town for a random stroll, and there are many tiny restaurants and bars at which to rest your weary feet along the way.

Amsterdam has several major street markets, with two of them standing out as the most worth knowing about. One is well hidden while the other is almost impossible to miss.
Waterlooplein Market
This one surrounds the Stadhuis-Muziektheater complex just a block from Rembrandtplein so nearly every visitor will pass through here at least once no matter what. This is where you’ll find loads of used offerings like tools and household items, but also some unusual crafts and even inexpensive clothes. This market relies heavily on tourists so many things you’ll find here are quirky and interesting to visitors. You’ll also find pipes and smoking accessories at very low prices here.
Hours: Mondays through Saturdays – 9 a.m. until around 6, but some vendors pack up earlier.
>>more information on the
Waterlooplein Market
Albert Cuyp Market
This street market runs for about a full kilometer in the Pijp neighborhood, with one end being very close to the Heineken Brewery. This one is hard to find unless you are specifically looking for it, but it’s a major part of the economy for locals. There are fruit and veg stands, cheese carts, butchers, bicycle dealers, electronics sellers, and loads of discount fashion stalls, among other things. If you are looking for cheap and trendy clothes, or just cheap clothes, check here first. There are no used items sold here nor are there smoking accessories, but many interesting stalls make this worth a stroll if you’ve got an hour or two.
Hours: Mondays through Saturdays (and some Sundays in December) – 9 a.m. until around 4 p.m., but depending on the crowd some vendors pack up early.
Amsterdam Book Market
Every Friday, from 10am to 6pm, you can find an impressive outdoor market that consists almost entirely of books. Most of the 20 or 30 vendors here are book collectors and dealers, so you’ll find plenty of rare and out of print books (many in English though mostly in Dutch), but there are also large collections of second-hand books at reasonable prices. There are also plenty of art books, so even if they are in a language you don’t speak they can still make a great souvenir for your coffeetable. The market is in the Spui plaza, just off Kalverstraat, mentioned above.
>>more information on the Amsterdam book market
>>more information on the Albert Cuyp Market